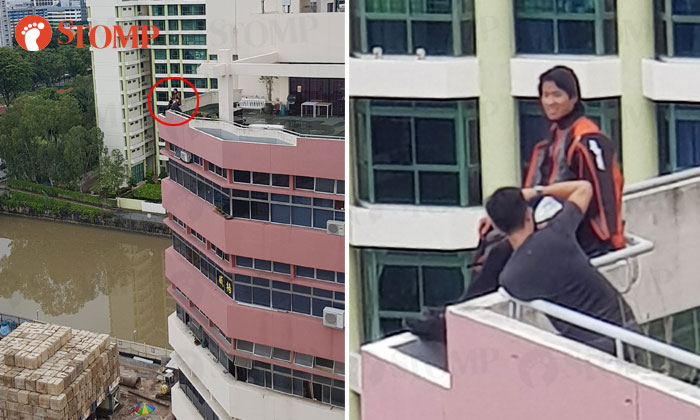 Stomper Bay was shocked when he saw a couple of guys taking photos on the rooftop of 21 Moonstone Lane on Thursday (Oct 11) at about 4pm.

One young man was sitting at the edge of the roof of the ten-storey building, posing as his friend took photos of him.

Bay, who lives next to the building, was looking out when he saw them.

"What was concerning to me was that the rain had just subsided so it would have been very slippery," he said.

"How stupid can you be to endanger yourself like that?

"People seem to disregard their own lives for Instagram-worthy pictures."

He added that he often sees groups of young people gathered on the roof as a bar is located in the building.

However, this is the first time he has seen someone sitting precariously on the edge.

He hopes that people will be more careful and not attempt such "stunts" just for a photo.

In recent years, more and more youths have been seen risking life and limb to take cool shots or videos they can post on social media to get "trending".

Last December, a local photographer slammed this trend and criticised these "thrill seekers" for even calling themselves photographers.

Related Stories
Local photographer slams 'hipster Instagrammers' who pull dangerous stunts for photos
Youths seen posing and taking photos dangerously close to edge of roof at Punggol building
If they slipped from a carpark rooftop, it could have been the last selfie for these youngsters
Youth climbs over parapet and performs push-ups while dangling several storeys above ground
More About:
height
dangerous
instagram
photo
selfie