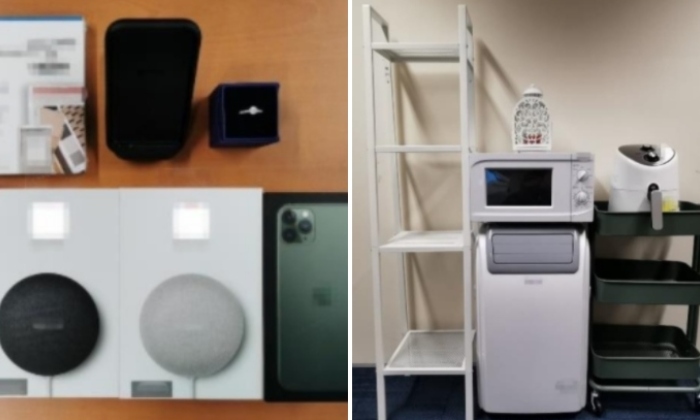 A 22-year-old man and a 19-year-old female teenager were arrested on Thursday (Oct 22) for their suspected involvement in using a found credit card to make unauthorised transactions.

The police said in a statement that they received a report from a victim on July 13 who discovered that several unauthorised transactions had been made with his missing credit card.

Through investigations, officers from the Commercial Affairs Department established the identities of the duo and arrested them.

"Preliminary investigations revealed that the man is believed to have found the victim’s credit card and, together with the teenager, allegedly used it to make unauthorised transactions amounting to more than $5,000," said the police.

"Two mobile phones, a ring, a stored value card, household appliances and electronics gadgets believed to have been purchased using the victim’s credit card, were seized as case exhibits."

The duo will be charged in court on Friday (Oct 23) with cheating, which carries a jail term of up to ten years and a fine.

The police would like to remind members of the public that unauthorised use of another person’s credit/debit card is a serious offence.

Related Stories
Man arrested for going on $2,500 shopping spree with credit card that he found
Man stole woman's credit card info and made unauthorised transactions of over $10k
Police looking for man to assist with investigations into fraudulent use of credit card at Geylang
More About:
credit card
arrest
cheating