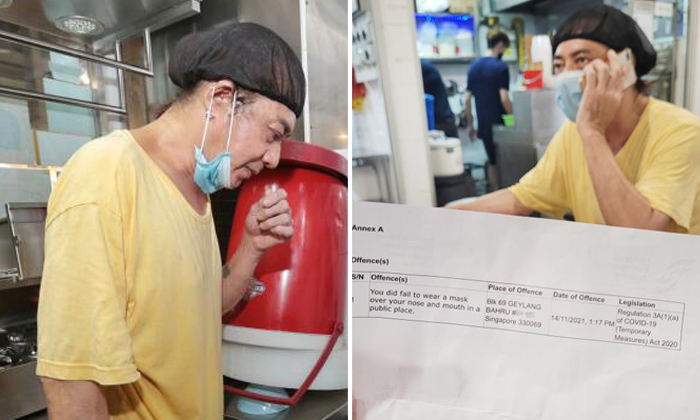 A duck rice stall vendor at Geylang Bahru Market and Food Centre pulled down his mask to try the sauce that he had prepared — only to get fined.

Wang Rongfu, 60, told Shin Min Daily News that he and his wife each received a $300 fine after the incident on November 14 at around 1.30pm.

According to Wang, he had been chopping duck meat at the stall while his wife attended to customers. At that time, there were more than 20 patrons in the queue.

As he was running low on sauce, he went to prepare a new batch. Wang pulled down his mask and used a spoon to taste the sauce.

Two safety distancing ambassadors (SDAs) then came to the stall and asked for the couple's personal particulars.

Wang recounted: "Another three SDAs came over and said I had violated regulations by not wearing a mask. If I didn't cooperate, they would call the police to the scene."

As there were still customers in line and worried about his business getting suspended, Wang complied with instructions, in hopes of explaining the matter afterwards.

The following day, Wang contacted the authorities to clarify the issue, but to no avail.

He shared: "They said the SDAs had seen us not wearing masks, so it was just routine."

Wang said that he had his mask down for less than ten seconds and thought he would be given a warning at most, but did not expect to receive a fine.

The fine has to be paid by December 16.

"I have been operating my business for 30 years and have always paid attention to hygiene, even wearing a headgear," Wang added.

"We understand that preventive measures must be taken during the pandemic, but this is really unreasonable. Is my stall space also a public place?"

Shin Min understands that the couple had been told by SDAs to wear their masks properly once before on the day of the incident. Their particulars had been taken down when the mask of Wang's wife slipped under her nose.

Wang also said that a week prior to the incident, SDAs had reminded the couple to wear their masks properly when preparing food.

However, he was issued a fine directly without any verbal warning on the day of the incident. Wang's wife was also fined for wearing her mask "too low", which he said he did not understand.

Many customers were also confused and asked the couple why they were fined, said Wang.

He added: "The summons stated that we were not wearing masks in a public place. I hope the authorities can give clearer instructions.

"Fines are a small matter but I'm afraid of being a repeat offender. When that happens, it won't be as simple as a fine and my business might even be suspended. I hope to avoid this."

Responding to the matter, the National Environment Agency (NEA) said five Safe Distancing Enforcement Officers (SDEOs) had been deployed to the hawker centre at Block 69 Geylang Bahru that day.

NEA added: "At about 12:30pm, two SDEOs from the National Environment Agency noticed that a man and a woman operating a duck rice stall had their masks below their nose. They were not eating or drinking.

"Approximately an hour later, the SDEOs observed the same man and woman wearing their masks below the nose. Both the man and woman were not eating or drinking. The man was cutting cooked meat while the woman was serving patrons.

"The SDEOs approached the pair to inform that they had breached safe management measures by improper wearing of masks, and NEA would take enforcement action against them."