Drunk woman slaps security officer, shouts vulgarities and wails as she gets restrained at Koek Road 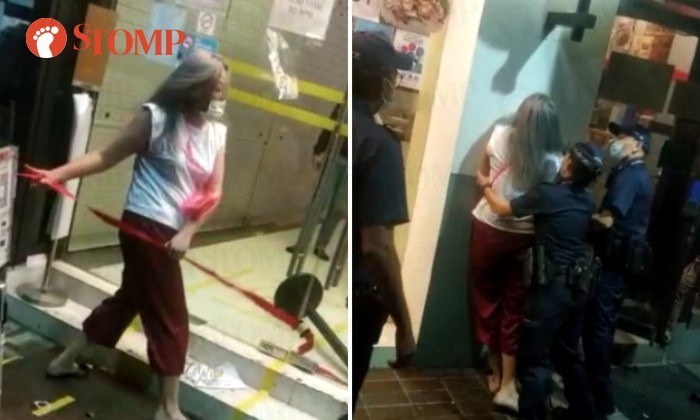 A woman was arrested on Dec 8 after she made a dramatic scene by hitting a security officer, screaming and wailing at 5 Koek Road.

In response to a Stomp query, the police said they received a call for assistance at 11.09pm.

"A 34-year-old woman was arrested for causing annoyance to the public when drunk and using abusive language against a public servant," added the police.

A video of the woman making a scene circulated on social media over the weekend and has since been viewed over 20,000 times after it was posted on SG Chinese Community's Facebook page.

In the video, the woman can be seen kneeling on the ground before quickly standing up to try to pull open a glass door.

A few passers-by, including a security officer, try to stop her but she continues screaming and even shouts vulgarities at them.

The woman then proceeds to slap the security officer twice before slapping another man who is seated on the ground trying to hold onto the door.

At one point, she slaps the security officer and his mask flies off but he quickly picks it back up and wears it.

After the bout of slaps, she picks up a long red canvas strip meant to be used as a barrier and starts swinging it, hitting the men around her in the process.

A man behind her tries to intervene, and he gets slapped too.

The man then restrains her with the help of another man, but the drama does not end there.

The woman starts wailing and screaming loudly, but does not try to resist the men's restraints.

Two police officers can then be seen arriving at the scene and restraining the woman.

The video ends when one of the officers signals the cameraman to stop filming.

Related Stories
Drunk woman sprawled on table at Maxwell Food Centre: 'Even her friend was paiseh'
Drunk woman taken to hospital -- but not before she said 'I love you' to paramedics
Drunk man refuses to leave Siloso Beach waters despite lightning warning
More About:
drunk
arrest
police
funny