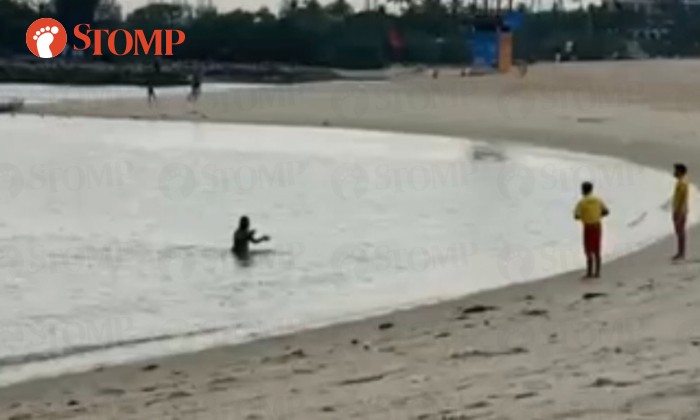 A drunk man refused to leave the water at Siloso Beach despite a lightning warning and several lifeguards asking him to do so.

Stomper Clara was at Siloso Beach on Thursday (Oct 29) at 4pm when she noticed a man swimming in the water despite being asked to return to shore multiple times.

In the video that she sent, several lifeguards can be seen attempting to persuade him to get out of the water.

"The lightning warning system was on and everyone already got out of the water except for this guy. I'm pretty sure he was drunk," Clara said.

"The lifeguards asked him to get out of the water but he refused.

"He even shouted f*** the warning system.

"At first I was confused, then I got annoyed at him because the lifeguards seemed tired and upset."

In response to a Stomp query, a spokesman for Sentosa Development Corporation said: "The safety and wellbeing of everyone in Sentosa are our utmost priority.

"As lightning had been forecast on Thursday (Oct 29) at around 4pm, our Beach Patrol Officers (BPO) advised all guests at Sentosa’s beaches, including a man who entered the waters at Siloso Beach, to seek shelter for their safety."

The spokesman added that his companions subsequently assisted him out of the water.