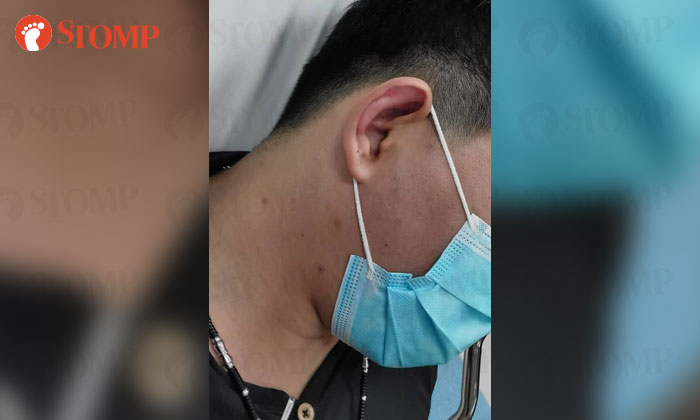 A Grab driver was taken to hospital after he was allegedly punched by a passenger at Serangoon Gardens on Monday night (Jan 25).

The 37-year-old driver, Stomper Pan, told Stomp he had been assigned to pick up a passenger outside Srisun Express who wanted a ride to Ang Mo Kio.

"When I arrived, I waited a while," he said.

"When the man entered the car, I could smell the reek of alcohol.

"He was holding a can of beer and not wearing a mask.

"Due to a recent case where someone vomited in my car, I told him politely I would not take him but he replied he would not leave the car.

"I turned and told him again I would cancel the ride on my side but then he suddenly punched my head, hitting my eardrum and causing a minor brain concussion."

Pan told Stomp he was hospitalised for a day and was given a five-day medical certificate (MC).

"I don't think I deserve this, trying to earn a living by working two jobs during this pandemic," he said, adding that he works part-time as an usher as well.

Pan, who is Singaporean, shared with Stomp that his Vietnamese wife and two children are currently in Vietnam. He has not met his nine-month-old daughter yet as his wife returned to her country when she was seven months pregnant in January 2020.

"Now, I can't work for one to two weeks and will not be getting paid during this time," he said.

"I was supposed to bring my wife home before Chinese New Year so that I can see my son again and meet my baby for the first time.

"Now, I'm really struggling so I guess it will have to be after Chinese New Year."

In response to a Stomp query, the police said they were alerted to a case of voluntarily causing hurt along Farleigh Avenue.

"A 37-year-old man was conscious when conveyed to Tan Tock Seng Hospital," a police spokesman said.

"The man was advised on his legal recourse."