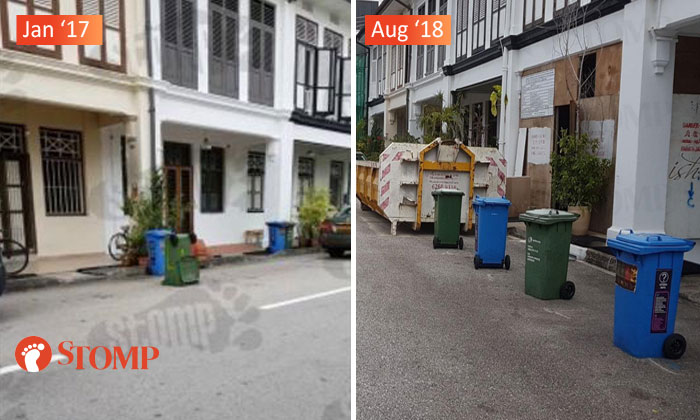 We know of people who use tissue papers to chope or reserve seats to eat in restaurants but did you know there are drivers who use rubbish bins to reserve parking lots for their vehicles?

Unsurprisingly, this behaviour can frustrate other road users. Stomper Ben came across this practice being carried out along Cheow Keng Road on Aug 25.

"Can chope parking lots like that, meh?" he asked.

Ben told Stomp that the road is a "notorious" area where drivers chope lots.

"Each and every time we go there for meals, we see these chope-ing habits," he said.

"I guess it's an everyday affair."

"These people are obviously inconsiderate, selfish and kiasu."

This is not the first time that Stomp has been alerted to chope-ing of lots along Cheow Keng Road.

In January last year, Stomper Chan shared a video where dustbins were used to 'chope' spaces in between several parked cars along the road.

Towards the end of the video, even a clothes hanger was used to reserve a parking space.

In response to a previous query made by Stomp, the Land Transport Authority (LTA) issued the following response:

"For such issues within the private estates, the Land Transport Authority (LTA) adopts a community approach towards resolving them by advising residents to ensure that their objects do not pose a safety hazard or an obstruction to other users.