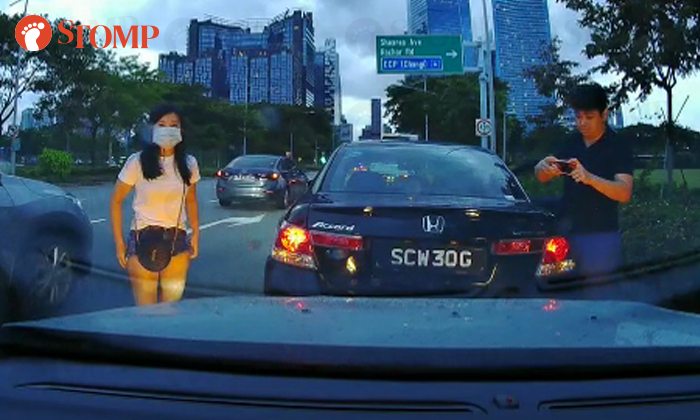 A Hondo driver suddenly cut into Stomper KC's lane and jammed on the brakes, causing a collision between both vehicles.

The incident occurred along Central Boulevard, before Sheares Avenue, on Saturday (Sep 26), at around 6.45pm.

Stomper KC, whose kids aged three and 11 had been in the car with him, shared dashcam footage of the incident.

KC recounted: "This Honda driver cut into my lane at high speed and then deliberately jammed on his brakes despite the lack of traffic in front, causing an accident.

"My two kids in the car were both very traumatised and cried non-stop. They sustained whiplash to their bodies."

Dashcam footage shows a male driver and his female passenger exiting from the Honda after the crash.

The male driver can be seen using his mobile phone to take multiple shots of KC's car.

The Stomper added: "The two of them were very hostile despite me having kids in the car.

"They shouted at me to come out of my car to 'settle', so I quickly locked all my doors.

"I called the police and waited for them to arrive before I came out."

Asked if anything could have sparked the Honda driver's actions, KC shared: "I have no videos showing what happened before as my camera only recorded upon impact, but I did cut his lane unintentionally. It was carelessness on my part.

"But again, that does not warrant such dangerous actions from the other party.

"I hope to share this video to warn other road users of such dangerous drivers around."