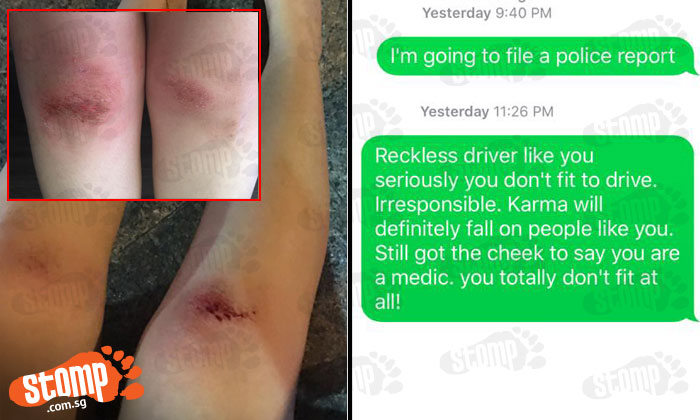 Imagine alighting the cab mid-way with your toddler in your arms, and your driver starts moving off without waiting for you. Thankfully you manage to get your kid out of the car safely, but end up falling and sustaining a few injuries while at it.

Stomper Kelly was travelling from Westgate Mall to West Mall with her family of five and one Uber driver, Pressenaa, at around 8pm yesterday (Dec 26) when the following incident took place.

"As the vehicle reached the drop off point at West Mall, I was halfway through alighting the vehicle with my three-year-old daughter in my arms when the Uber driver moved the car - causing me to lose my balance and fall to the ground," recalled the Stomper.

Due to the accident in which the Stomper fell, both her knee caps and right toe wre injured with some lacerations.

Though the Stomper had difficulty standing up, she managed to speak to the driver who had not moved off completely as her husband was still paying for the ride. The driver's reason for moving off was because another vehicle was moving in and she could not stay at the drop-off for long, but Kelly reasoned that she had not fully alighted either, so she should not have driven off.

"Thankfully my mother and nephew got off safely before all this happened.

"I managed to get my girl out safely but she landed on the ground and got a little scared at what happened.

"I immediately informed the driver of my injuries and managed to get her contact number in case she wants to drive off, and also to claim my medical treatment from her.

"She told us she would go park the car and come find us at the clinic nearby, and even claimed that she was a medic.

"But she never did come over. We gave her many calls but she refused to answer them."

Kelly also sent the driver a few text messages, but once again did not receive any reply.

Thankfully no one was conveyed to the hospital, but Stomper Kelly had to seek her own medical treatment at One care Clinic Bukit Batok.

Stomper Kelly has since lodged a police report, informed Uber Singapore via email and Facebook.

We sure hope this matter gets resolved soon.

What a "reckless" driver she is huh!?

"Drivers like this should be taken off the road."