Watch where you're going leh? Hit and run at junction of 991 Alexandra Road 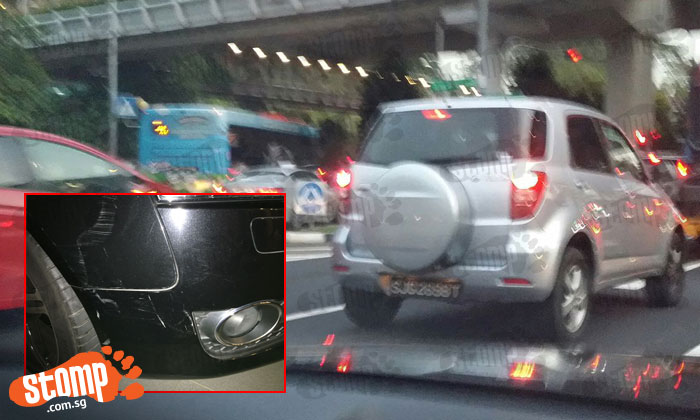 Stomper Valetia was in the car with her mum when she witnessed another driver speed off after hitting the right mudguard and bumper of her mother's vehicle.

The incident took place yesterday (Nov 9) at around 6.45pm, at the junction of 991 Alexandra Road.

"My mum was in her car within the yellow box with the right hand signal light turned on to indicate that she was queuing to join the outermost lane.

"A silver coloured SUV (plate number SJG26XXT) then moved up from the rear alongside the right side of her stationary car.

"Instead of allowing my mother to move into the lane, the lady driver of the SUV attempted to drive past the front of the vehicle and in the process hit the front of my mum's car's right mudguard and bumper.

"As there was heavy traffic, my mum moved her car off first, switched on her hazard lights, and attempted to draw the lady driver's attention to the accident.

"Shockingly she acted as if nothing happened and kept looking to her left and avoided looking in my mum's direction.

"As soon as traffic lights ahead turned green and she switch into the next lane to the left and sped off In the direction of Telok Blangah Road without stopping."