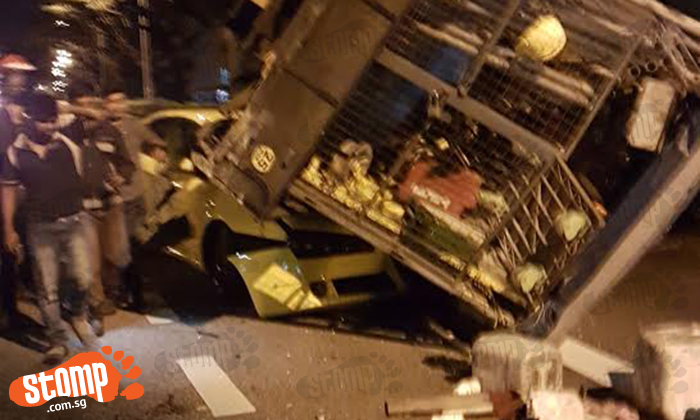 Stomper Leow saw a car end up getting wedged under a lorry after a collision at PIE, towards Tuas, at 4.15am today (Dec 26).

The Stomper said the driver of the car, which was yellow in colour, was speeding, jamming on the brakes and changing lanes recklessly.

"I quickly switch to lane one to avoid him, said the Stomper.

"After Lornie Road exit, the yellow car suddenly sped up to at least 150km/h.

"Within 30 seconds, it went from me seeing him to me seeing the same car having already collided into the lorry just before the Toh Guan Road exit.

"I stopped my vehicle to assist the truck driver and passenger to get out and called for an ambulance.

"The driver somehow managed to escape and was nowhere to be seen.

"Someone else who was at the scene said he saw an individual hiding behind a bush nearby.

"I gave my details to the traffic police and left."

In response to Stomp's queries, the SCDF said it was alerted to a road traffic accident along PIE Tuas, before Toh Guan exit at approximately 4.25am today.

SCDF dispatched one ambulance to the scene.

Upon the ambulance's arrival, two male Indians in their 20s refused conveyance.

Related Stories
Malaysian toddler killed after he plays with vehicle door, falls out and gets crushed by car
Man crushed between 2 lorries after horrific accident on SLE
car wedged under lorry
driver MIA
accident