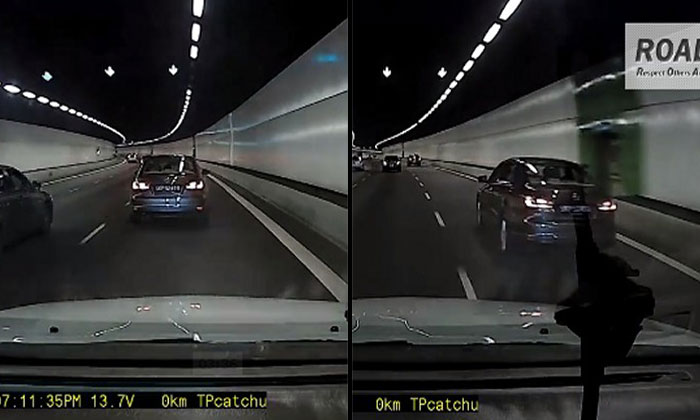 Stomper Johnny was traveling along the Kallang–Paya Lebar Expressway (KPE) tunnel towards the Tampines Expressway (TPE) on Dec 3, at around 7.08pm, when he encountered a reckless driver.

The driver cut the Stomper's lane, hogged the road and then made a sudden turn.

"This driver totally disregards all motorists sharing the road with him.

"Drove past him and saw that he is very young and ferrying a lady.

In an email to the Traffic Police, Johnny said:

"He cut to the first lane in front of me without signalling.

"When I cut behind him he started hogging the first lane."

"At that time my speedometer showed 50 km/hr.

"Traffic was clear in front of him but he refused to give way to other cars.

"He was driving even slower than the cement truck on the last lane.

"When exiting the tunnel, he suddenly sped off at a very high speed and did a last minute exit.

"He has totally no regard for safety and also violated traffic rules and regulations."

Watch the video below

Related Stories
Watch how reckless driver cuts it close by driving in the middle of road at Woodlands Drive 16
Oi driver of SJU 2579E, you nearly caused an accident near Chinatown Point!
Eh hello, does your vehicle look like a motorcycle to you?
uber
cut lane
cut
reckless driver
reckless driving
cabby abruptly cuts into other driver's lane without signalling
no signal