New videos show rider (FBL 4329P) chasing and challenging driver to a fight, then hitting and jumping on his car 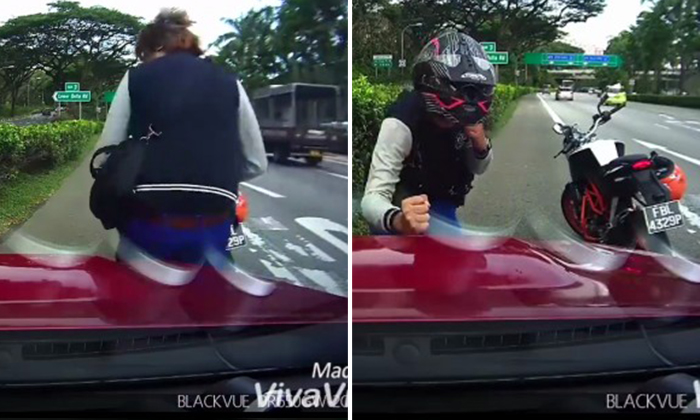 The driver who was challenged to a fight by a motorcyclist on AYE has posted two longer videos and photos, along with more details of the incident.

Stomper Apid had previously alerted Stomp to a video of the incident that was circulating online after it was uploaded by Facebook user Hazrul Sani.

The seven-second clip, captioned, "Sneak preview", shows the biker seemingly bracing himself for a physical row by removing his jacket, jumping on his feet and getting into a fighting stance.

Hazrul has since taken down that clip, and posted some photos and two longer clips to show what happened.

He said in his updated post that while driving on AYE on Dec 3 at 4.10pm, the motorcyclist riding a motorbike with the licence plate number (FBL 4329P) kicked his passenger door twice.

Hazrul tried to drive away to avoid a conflict, but the motorcyclist chased him.

When Hazrul wound down his window and asked the rider what was wrong, but did not receive a response.

So the two stopped by the side of the road, and the biker got off his motorbike and told Hazrul that he stopped him because of his car's exhaust backfire.

He banged on Hazrul's door and  was convinced that the driver's car exhaust was illegal.

Hazrul showed him his car's certificate when the rider insisted on seeing it, follwing which he challenged the driver to a fight.

When the driver did not respond, he hit the car multiple times and even jumped on it.

When Hazrul called the police, the motorcyclist noticed this and rode off.