Man gestures angrily at driver in the middle of road, then punches and kicks car when the other does not step out 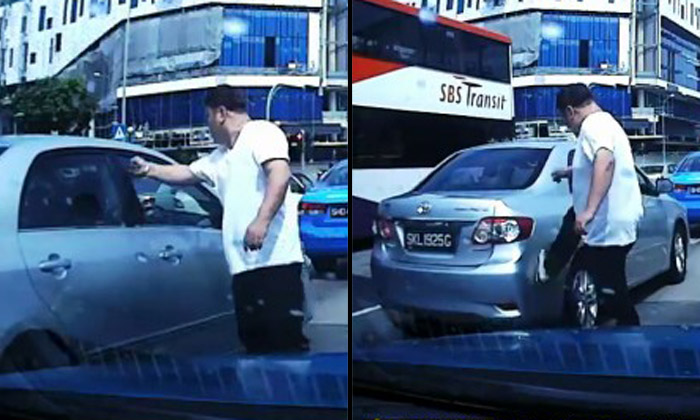 A man was caught on video gesturing angrily at a driver in the middle of the road, then kicking and punching the car when the other refused to step out of the vehicle.

A contributor named Lewis Fu had shared the clip of the incident, which occurred near Tampines Mall, on Beh Chia Lor - Singapore Road.

The clip shows a man, clad in a white t-shirt and black pants, pointing and yelling at a driver in a grey car in the middle of the road near a traffic junction.

The man can be seen gesturing for the driver to step out of the car, pointing angrily and even trying to open the vehicle's door.

He repeatedly gestures angrily at the driver, and punches the window when the other does not step out of the vehicle.

He tries again to open the door by force, and kicks the car when the driver simply drives off.

Many netizens commented that no matter what the other driver may have done, reacting in such a manner is of no benefit to anyone.

Most who commented on the video also pointed out that the man in the white t-shirt was endangering himself and others by standing in the middle of the road.

Related Stories
Driver of SDZ117M who confronted BMW driver shares his side of the story -- but might have shot himself in the foot
Wah, 'gangsta' sia! Biker challengers driver to a fight on AYE
See how taxi 'smokes out' car and blocks him from changing lanes
Driver cuts across two lanes to confront cabby on AYE, holding up traffic and nearly causing accident
Biker hurls vulgarities at woman and calls her 'bas***d': But surely he must have a reason for getting so angry?
man hits car
argue in the middle of road
road rage