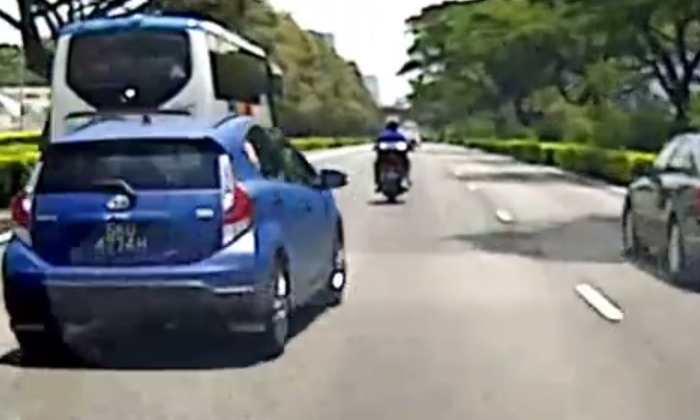 Like a scene out of The Fast and the Furious: Tokyo Drift, a driver of a blue Prius C decided that Singapore roads are the perfect place to perform a manoeuvre stunt by dangerously swerving across lanes.

Driver YJ Khoo was driving down the middle lane when the wannabe street racer abruptly cut across and almost crashed into an unsuspecting silver grey car on the far right lane.

In the video below provided by YJ Khoo on Beh Chia Lor - Singapore Road's Facebook page, YJ Khoo honked at the Prius C SKU4774H before he and his female companion let out a loud gasp as the reckless driver almost knocked into the silver grey car.

While many Facebook users left angry comments on the Facebook video about the Prius C driver's recklessness, some users defended the driver.

"Don't be too fast to judge, maybe the blue car in a hurry due to emergency."

"Always remember sometimes people in an emergency they need to pass you quickly just keep to left and let them pass you end of story," user Exxal Rose added.

Could this be an emergency? Or is this simply just another reckless driving incident?