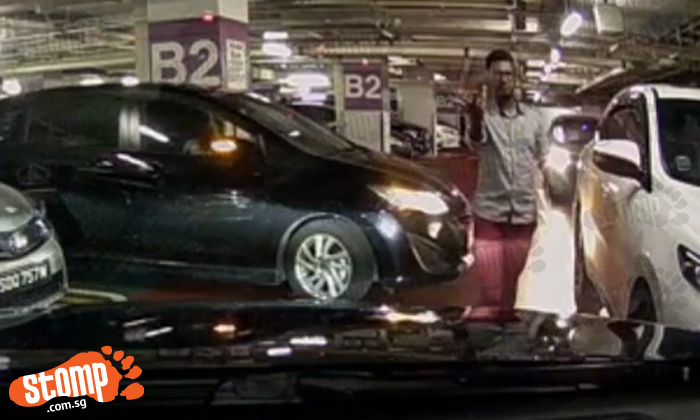 Irritated about having to wait for at least two other drivers to park their cars, a driver exited his vehicle to rebuke them while making rude hand gestures.

Stomper Paul was one of the drivers who faced the man's wrath.

He sent in a video that was captured by his in-car camera and said that the incident occurred at Tampines Mall's multi-storey carpark yesterday (May 25) at around 2.40pm.

Paul said that he had been waiting to park his car and a female driver, who can be seen in the footage, was also reversing in and out of her lot repeatedly.

The driver of a white Toyota Harrier is then spotted exiting his vehicle to chastise Paul and the woman, as well as make rude hand gestures at both of them.

Paul said, "He said to me, 'What you want? What you want?' But I can't really hear what he told the female driver."

"What happened to graciousness?"

Paul eventually managed to park his car and said that the man later left the scene to "go shopping".

Watch what happened in the video below.

Related Stories
Jaywalker has the cheek to give 'death stare' and point middle finger after getting honked at
Pedestrian crosses road without checking for traffic, gives driver stink eye for honking at her
rude
driver
dispute
parking
parking lot
Tampines
road rage