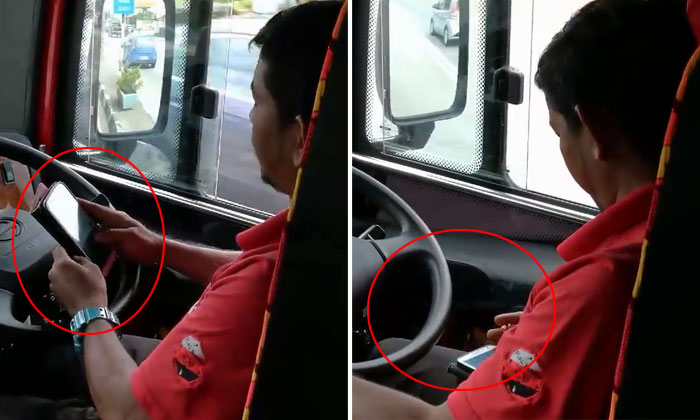 Two short video clips which showed an express bus driver in Malaysia smoking and using his mobile phone while driving went viral ever since it was first posted on Facebook at around 2.05pm on Monday.

To note that these videos are not related to the bus crash which killed 14 on Christmas eve -- along the North South Expressway near Muar.

However, this did not stop netizens from associating the clips to the fatal accident.

According to The Star, the two clips were posted along with a photo of the bus company and the number plate of the vehicle by Facebook user Firdaus Wong Wai Hung.

The first 19-second clip showed the male bus driver maneuvering the steering wheel with his left hand while holding a cigarette and using his mobile on his lap.

The second less than 20-second clip showed the driver holding the phone with his two hands while reading the messages and texting.

And his eyes were simply off the road! How 'responsible' huh!?

The footages were captured at around 1.25pm after the Tangkak toll plaza aread, and the bus was headed to Muar from Kuala Lumpur on Monday (Dec 26), reported The Star.

By 6pm, the FB post garnered over 300 comments, over 20k shares and over 1k reactions.

The Mayang Sari Express bus company has received a report with regards to the driver and will be conducting an internal investigation soon.

Johor Road Transport Department (JPJ) director Mohd Rusdi Mohd Darus said stern action could be taken against the bus driver for not having proper control of the vehicle while driving it.