Drugged truck driver causes 38-vehicle-collision in Thailand: I have been drug-driving for over 3 years now 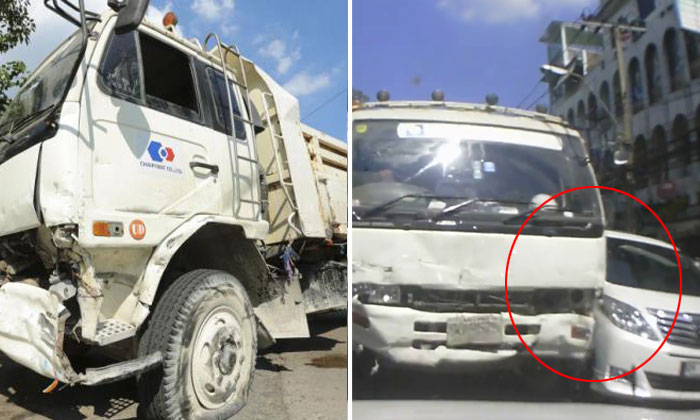 A six-wheel truck driver who was allegedly under the influence of drugs, was nabbed near Sukhumvit Soi 63 in Bangkok's Wattana district Wednesday afternoon, for causing a 38-vehicle collision.

According to BangKok Post, the suspect who was fleeing after his hit-and-run with a policeman's motorcycle, went on to damage 10 other vehicles which caused a pile-up of 28 other vehicles in a five kilometre stretch of Sukhumvit Soi 63. Due to the road closure after the major accident, this caused severe traffic jams.

Alerted to the incident at around 1pm, the police rushed to the scene only to find 26 cars and two motorcycles hit by the truck from the middle of the mouth of the soi -- where the truck was parked after running out of petrol.

Identified as Ekkaphot Yossiri, 27, the truck driver reportedly fled towards Ekamai Skytrain Station on foot, where he was surrounded by some 20 people who had given chase.

City police chief Lt-General Sanit Mahathaworn told the press later Wednesday that Ekkaphot confessed to be high on drugs, a claim that was backed by a positive urine test and 1.93 grams of "ice" in his possession.

This was however not new for Mr Ekkapot. He had been previously arrested for drug offences in 2011, 2013, 2013 and recently in July this year. Some people just never learn huh?

Mr Ekkapot told police he had used drugs for three days prior to the road rampage because he was upset that his wife had left him.

He was on his was back from delivering construction materials to a client in the Saphan Kwai area when he drove in the wrong lane and was stopped by a police. Not having enough money to pay the fine, he sped away, resulting in his reckless driving.

He also added that he had been driving under the influence of drugs for over three years but had never been involved in a road accident before.

Phet Thaweesin, one of the victims, posted a video clip on his Facebook when his car was hit by the lorry. Mr Phet said he had just left his office to see a customer in Thon Buri.

"He drove like he was high on drugs," he said. The post was shared online and sparked criticism and harsh words against the driver.

An initial investigation found that the lorry is insured with Syn Mun Kong Insurance to cover only 600,000 baht in compensation to damaged parties.