Driver sounds horn at, chases and stops woman who made reckless turn 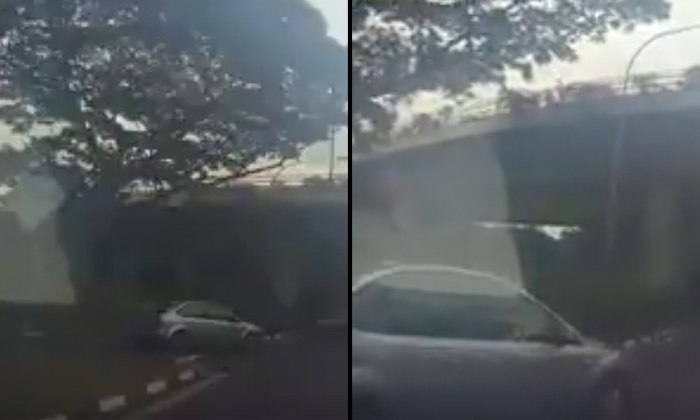 Car cameras have become very useful of late to prove who is truly in the wrong, but this video from All Singapore Stuff may have shown the driver in a bad light.

Posted on the Facebook page yesterday (Oct 3), it was titled "Reckless Ah Lian driver of SGV 6511D dashes out into incoming traffic and nearly kills a mother, her helper and 2 kids sitting in our reader's car".

The video depicts the silver car dashing out, but the mother continues to sound her horn before cutting in front of the vehicle and forcing it to stop.

The mother is also heard telling her children angrily "what is she doing" and  "I'm going to tell her to stop".

Many slammed her for stopping the other driver right after the bend and not slowing down while approaching the side road.

Some even said she was putting her children in danger by stopping her car on the expressway and causing a hazard to road users behind.

Facebook user Pauline Tay defended the driver, saying "Cam driver heard a loud thug, both vehicles were v near each other". She proceeded to call other users out for being sexist by saying "obviously if it's a male driver, I guess the conversation would have strike differently".

Other users commented that they did not hear a "bang" and questioned if "Pauline Tay" was the driver in the video.

See the video below and decide for yourself who is in the wrong.

Related Stories
Sacked for reckless driving: Cabby who sped off after reversing into car at Redhill carpark
Reckless drivers like cabby of CityCab SHB 4752G need to be taken off the roads
More About:
car
reckless driver
road rage
road bully