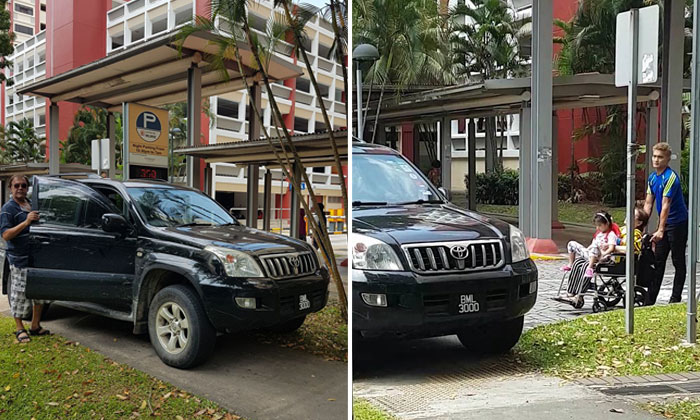 Facebook user Sivodayan Damohdaran confronted a driver who had parked his car on a pavement at Block 632 Woodlands Ring Road on May 7 only to be challenged back.

Sivodayan had initially thought the Malaysia-registered car with licence plate number BML 3000 had been involved in an accident or there was an emergency.

When the driver came walking over, Sivodayan asked him why the car was parked there to which he responded arrogantly that the car was his and that he had been parked there for over an hour.

"He even asked if I wanted to see his IC (Identification Card) and driving licence," Sivodayan wrote.

He added that the driver's wife even took a photo or video of him so he smiled for the camera.

He was amazed at the man's total disregard for blocking the way for pedestrians, cyclists and even wheelchair users and how he felt no sense of guilt at all.

In a video taken by Sivodayan, the driver even blocked the path of a man pushing an elderly lady in a wheelchair while reversing from the pavement.