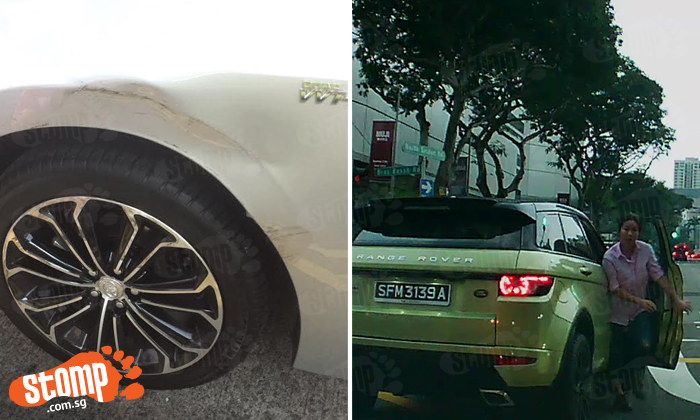 A couple had the shock of their lives when a driver decided to go straight on a left-turn only lane and collided into their car at the junction of Bras Basah Road and North Bridge Road.

According to Stomper Jeffery, the incident happened on Aug 6 at about 6.20pm. At that time, his brand new car had been on the road for less than a week.

Jeffery's wife was driving on the second lane, a left turn/ straight optional lane, while the Range Rover driver had been on the leftmost lane, a left-turn only lane.

"Vehicle registration number SFM 3139A was on my left first lane supposed to turn left instead speed up and go straight and hit my car while my car was turning left.

"My wife was driving and I was sitting on her left side. I could be killed if not of my wife turning left slowly."

"Because there is no injury involved, we were told that we do not need to make a police report."

In the clip, the couple was lamenting at their new car being damaged.

Jeffery feels that reckless drivers should get a fine or demerit points for their actions.

"Where is the justice for all good drivers who obey traffic rules," he said.

Related Stories
How does Toyota driver along Adam Rd think he can drive safely without a side mirror?
Driver of Honda SLE 4044D almost causes accident on PIE by recklessly changing lanes
More About:
accident
appeal
car
reckless driver