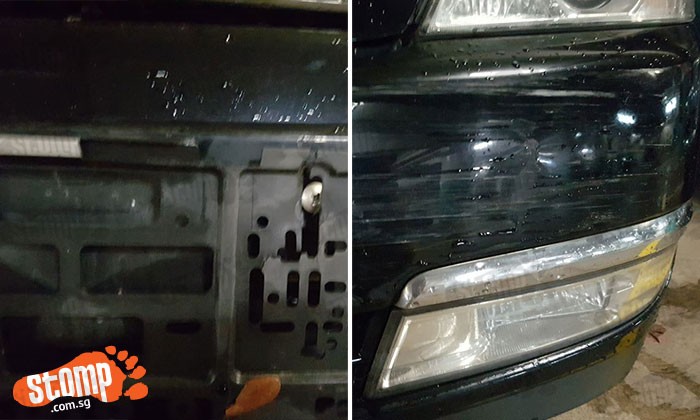 Stomper Cinmy's husband was driving on Devonshire Road towards Orchard Boulevard yesterday, (Nov 14) at 1.35pm and he was hit by a light blue sedan, causing damage to his car.

Cinmy and her husband had stopped at an intersection of Devonshire Road and Grange Road and driven off slowly two seconds after the lights turned green.

They then heard braking and honking sounds to their left and saw the light blue sedan speeding towards them.

Her husband jammed on the brakes but the sedan swiped the front of the Stomper's rental car and sped off on Grange Road.

There are now scratches on the car and the front bumper is broken.

The licence plate was also ripped off from the impact.

The Stomper said, "It was a really horrifying hit-and-run incident as the reckless driver had almost T-boned our car and could have severely injured or killed us."

She added, "We were too traumatised by the incident to take note of the car's licence plate so we would greatly appreciate any assistance from other road patrons who may have been in the vicinity during the time with any information to come forward."

Cinmy mentioned that she has reported the matter to the police.

Kindly contact us at stomp@stomp.com.sg if you have information about the accident.