Aggressive guy 'SDZ117M' jams on the brakes after getting honked at, asks BMW driver where his licence is from and challenges him to call cops 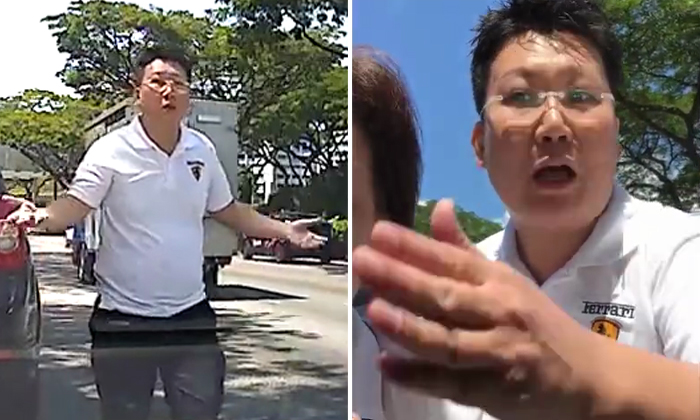 A man, with licence plate SDZ117M, turned aggressive and got into an argument with a BMW driver, after overtaking the latter's lane and getting honked at.

A video of the incident was uploaded on Facebook by Roads.sg and according to its timestamp, the dispute took place on Dec 4 at around 12.16pm, on the Pan-Island Expressway (PIE) towards Tuas.

It has since gone viral online, with Stompers Edwin and Michael alerting Stomp to it too.

The BMW driver, who filmed the clip, said in the caption:

"This incident involves vehicle 'SDZ117M' which was just entering into PIE via PIE Exit 8B.

"I horned at 'SDZ117M' to alert caution but 'SDZ117M' immediately jammed e-brake in front of my vehicle.

"He accused me of not slowing down my vehicle (I am already driving at 60km/h) and I should brake to allow him to enter PIE. But I did not even see his vehicle in front of me."

In the clip, 'SDZ117M' can be seen exiting his vehicle to confront the other party, despite an older woman's attempts to stop him. The other female they were accompanied by appears to be trying to film the incident on her phone.

Both drivers then engage in a heated quarrel, with 'SDZ117M' repeatedly asking the BMW driver where he got his licence from.

When the BMW driver said he would report what happened to the Traffic Police, 'SDZ117M' told him to go ahead and said he would do the same.

Despite the older woman's attempts to break up the dispute, she also blamed the BMW driver by saying that he was the one driving dangerously.

Netizens have blasted SDZ117M, with many saying that it was his fault in the first place for overtaking someone on the road shoulder.

"Must 'Stomp' this type of stupid driver that thinks he owns the road. Cutting in from road shoulder, yet want other vehicle on the expressway to give way to him for coming in from the road shoulder."

Watch the full confrontation below.