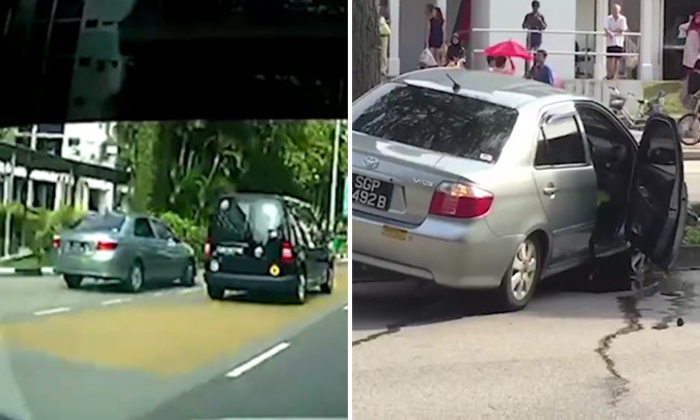 A heart-stopping video shows the exact moment a driver lost control of his car and caused the four-vehicle crash at Pasir Ris on Friday (Nov 4).

Mr Yeo, who was one of the drivers in the crash, told Shin Min Daily News that his iPhone charging cable was tangled in the steering wheel and causing it to jam.

As a result, he lost control of the car, the Chinese evening daily reported.

A video posted by Shin Min Daily shows the driver overtaking another car by using a bus bay.

However, as the bay ends and the road straightens, the speeding driver ends up hitting the kerb, lurching to the right.

He collided into another vehicle, before sending both into the centre divider and dislodging some metal rods.

One of the rods from the road divider flew into the road opposite and jabbed the bonnet of a third car, driven by private hire car driver Mr Goh.

A taxi was also hit by a dislodged metal rod.

Mr Goh told The Straits Times that the taxi had pulled over to pick up a passenger, and he overtook it.

The rod then came flying over, and missed him by less than a metre.

He jammed his brakes when he saw it.

"Everything was so sudden. If I was going faster, the rod would have hit me," the 26-year-old told The Straits Times.

The Singapore Civil Defence Force (SCDF) sent two fire bikes and an ambulance to the scene.

There were no reported injuries, SCDF said.