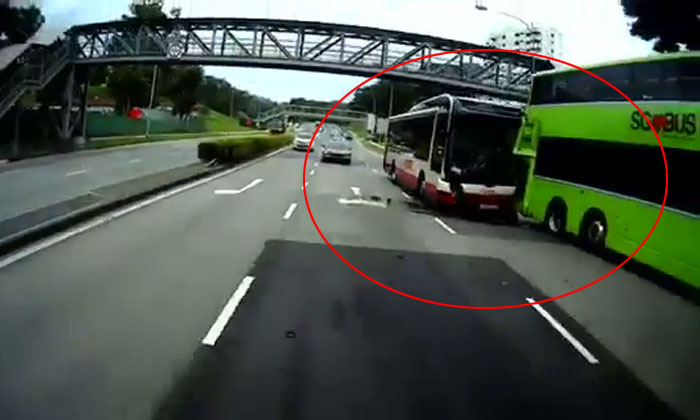 Barely an hour after leaving SGH, the couple found themselves back in hospital again, this time at the National University Hospital (NUH), after the SMRT bus they were in collided into the rear of a SBS bus in Clementi.

Mr Mohamed Yunos Dawood, 67, was on SMRT Bus 61 with his wife when he heard a loud crash and broken glass started flying towards him.

He managed to shield himself and dodged the shards, but the impact caused him to hit the left side of his face.

Behind the driver's seat, his wife was screaming in pain.

The bus they were on was involved in an accident with another at the junction of Ulu Pandan Road and Clementi Road at about 2.34pm.

After the crash, Mr Mohamed Yunos immediately helped his wife get off the bus.

The left side of her face was swollen due to the impact.

He said the bus's door frame fell inwards, hitting the coin box next to the driver's seat.

"I felt like a hero and everything," he said. "But after we got out of the bus, I started to feel dizzy."

Mr Mohamed Yunos said the bus was not very crowded at the time. Most of the passengers were in shock and some were injured.

Among the injured was a Filipino woman whose face was bleeding.

The driver of the SMRT bus also helped the injured passengers alight.A 20-year-old Ngee Ann Polytechnic student, who was on his way to school, was also injured.

His grandmother rushed down to the scene and told The New Paper at the hospital: "He called me and he could not really speak because he was in shock. He had to pass the phone to an SCDF officer, who told me what happened."

According to his grandmother, the boy had to have stitches and was bleeding on the inside of his mouth.

Mr Mohamed Yunos was relieved that he and his wife did not sustain any serious injuries.

SMRT spokesman Patrick Nathan said SMRT was assisting police with investigations and reaching out to the injured parties to render assistance.

SBS spokesman Tammy Tan said five passengers on the SBS bus were injured, with one taken to hospital for treatment.