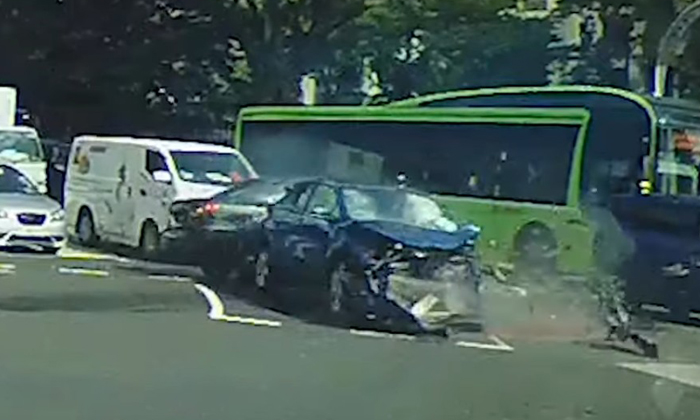 A 52-year-old car driver was arrested for suspected drug-related and traffic-related offences after an accident involving four vehicles in Sembawang last Friday (June 19).

The police told Stomp that they were alerted to an accident involving a bus and three cars at the junction of Sembawang Road and Gambas Avenue at 10.08am.

A video posted by Facebook page Roads.sg shows a black car beating a red light and ramming into a blue car, before hitting a bus.

The blue car is sent spinning from the impact and can be seen with its front bumper mangled.

In response to Stomp queries, the police said that a 50-year-old male car driver and his 39-year-old female passenger were conscious when taken to Khoo Teck Puat Hospital.

A police spokesman added: "A 52-year-old male car driver had fled the scene and was subsequently arrested along Canberra Road on the same day for suspected drug-related and traffic-related offences including dangerous driving, driving without a valid licence and taking of motor vehicle without owner's consent."