Driver weaves in and out of traffic, exits car to confront Stomper who honked at him 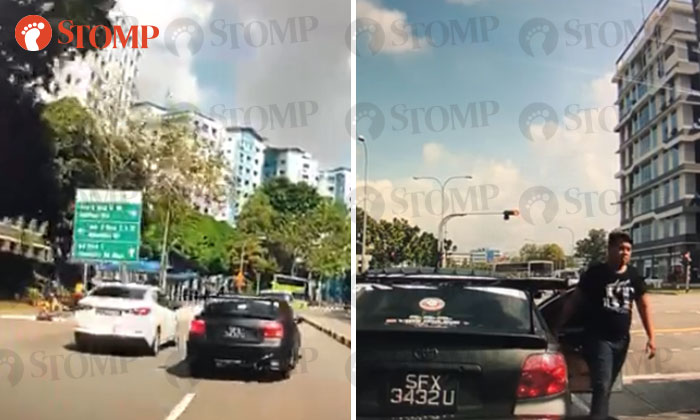 A Toyota driver not only weaved in and out of traffic but got out of his vehicle to confront Stomper Lee who had sounded his horn at him.

The incident which happened on Wednesday (April 11) at around 10 am, was captured on a dashboard camera of Lee’s car.

Lee was driving in the right lane of a road along Woodlands Avenue 6, next to the Woodlands Mart, when a black Toyota Vios SFX3432U suddenly zipped past him.

As observed from the video, the Toyota driver quickly overtakes another L-plate driver in the left lane, before stopping at a traffic junction ahead.

Lee then pulls up behind the Toyota driver at the junction and sounds his horn at him.

The driver alights his car, as Lee shouts at him: "Are you playing game? You're putting everyone’s lives at risk, you know."

The driver tells Lee that another driver had cut into his lane, almost resulting in an accident.

Said the Toyota driver: "Just now that fu**er cut my lane, you know. Luckily, I never hit him."

According to Lee, he and the driver then got into a verbal spat, before the driver got back into his car and drove off.

Said Lee: "I believe this kind of driver should be dealt with.

"Anyone can drive fast, but are you fast enough to use the brakes?

"This is a neighbourhood where there are many children and elderly folks. Driving like that is a safety hazard to everyone.

"He said he was avoiding a car, but you can see from my video, there was no such car. It must be an imaginary car."