43-year-old driver trapped in tipper truck after crashing into tree along ECP, rescued by SCDF 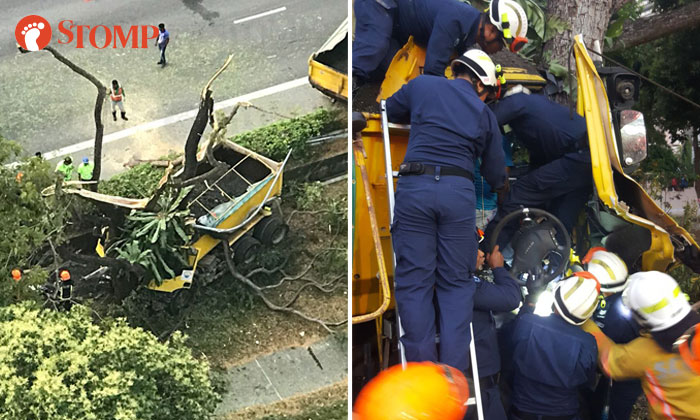 A 43-year-old man was taken to hospital after the tipper truck he was driving hit a tree along the East Coast Parkway (ECP) today (Feb 23).

Stompers Victor and Timothy shared photos and videos of the incident with Stomp that happened near the Tanjong Katong exit.

"The driver was stuck in the lorry," said Victor.

"Singapore Civil Defence Force (SCDF) officers were working to get the driver out."

A police spokesman told Stomp that they were alerted to the accident at 5.45am.

"The 43-year-old driver was conscious when conveyed to Changi General Hospital (CGH)," she said.

In response to a Stomp media query, an SCDF spokesman said that they were alerted to the accident at around 6am.

"A man in his 30s, who was trapped in the vehicle, was rescued by SCDF's elite Disaster Assistance and Rescue Team (DART) using hydraulic rescue tools.

"He was subsequently conveyed to CGH by an SCDF ambulance."