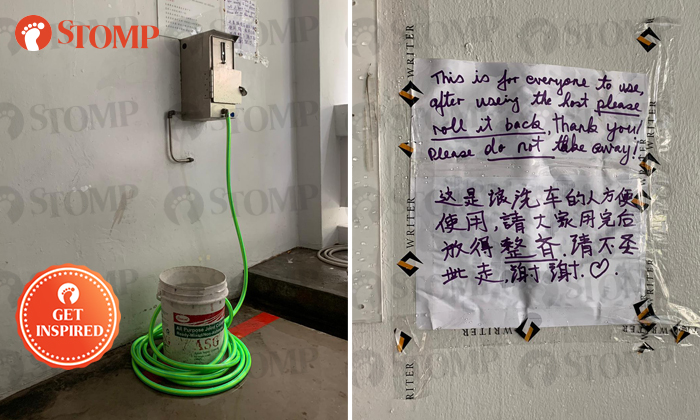 Washing his car normally takes Stomper Ben around two hours but thanks to a kind soul at Block 5A Holland Close, that time has been reduced by half.

According to Ben, an unknown person had left behind a pail and a water hose at the multi-storey carpark's washing bay on Deck 1B.

Ben, who is a resident in the area, was heartened when he saw the items at the carpark on Sunday (Jan 13), at around 2pm.

Photos that Ben shared show the plastic hose attached to a water dispenser at the washing bay and looped around the pail.

Near the water dispenser was a note on the wall that read:

This is for everyone to use, after using the [hose] please roll it back, thank you! Please do not take away!'

The same message was written in Chinese and signed off with a 'thank you'. The mysterious person had also drawn a heart shape.

Ben told Stomp: "I would like to applaud the kind-hearted person who 'sponsored' his/her long plastic water hose and pail for residents to use and wash their cars.

"His/her gracious act, unselfish behaviour and kind gesture helped to reduce my car wash duration by half, from two hours to one hour."

Ben said that he would usually fill up his own pail with water to wash his car, but having a hose has saved him lots of time and effort.

"I have no other means to thank you, so I hope I can use Stomp to extend my gratitude and thank you for your graciousness," added the Stomper.

Related Stories
We could all learn something from this Bukit Batok coffeeshop's honour system
Mosque in Jurong touches hearts by offering cold drinks to everyone, regardless of race or religion
Christmas tree with gifts at Segar Road void deck: 'Choose a present and feel free to bring me home'
More About:
kudos
heartwarming
inspiring
kind
carpark
note