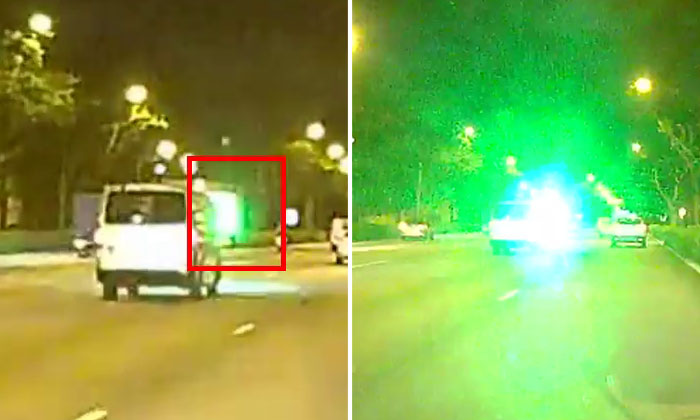 A motorist was driving along the Kallang-Paya Lebar Expressway (KPE) on Tuesday evening (May 28) when he noticed a glaring green light that he believes was a laser beam coming from a van.

Facebook user William Lee posted videos of the incident on SG Road Vigilante's Facebook group page and said he believes the driver of the van with licence plate number GBA7043B was "harassing other road users by shining [a] green laser beam at them".

However, Stomp cannot ascertain whether the light was coming from a laser or another light source.

The incident happened at about 8.50pm after the Buangkok East Drive exit.

William expressed concern at how this may pose a hazard to other motorists and cause accidents.

When Stomp reached out to him, he said the light affected his vision briefly.

"I was temporarily blinded when I experienced flash blindness for a brief moment," he said.

In one of the videos included in his post, the beam of green light appears to be bouncing off the right side mirror of the van.

William suspects the driver was shining the light into the right wing mirror and reflecting it at other road users.

However, some netizens speculated that it might have been a passenger or a kid playing with a laser beam.

Lasers are devices that produce a concentrated beam of light.

According to the National Environment Agency's (NEA) website, laser pointers are misused when they are directed deliberately at the eye or treated as toys.

The light energy from a laser pointer at the eye can be more damaging than looking directly at the sun.

The startling effect of a bright beam of light can cause serious accidents if it is aimed at someone driving a car.

The NEA added that green laser pointers are of particular concern as they may emit invisible laser beams as well as the visible beams, without being noticed by a user.

William informed Stomp he has since reported the incident to the Traffic Police.