Driver suspected of drink driving hits 10 motorcycles and tries to flee, gets stopped by residents 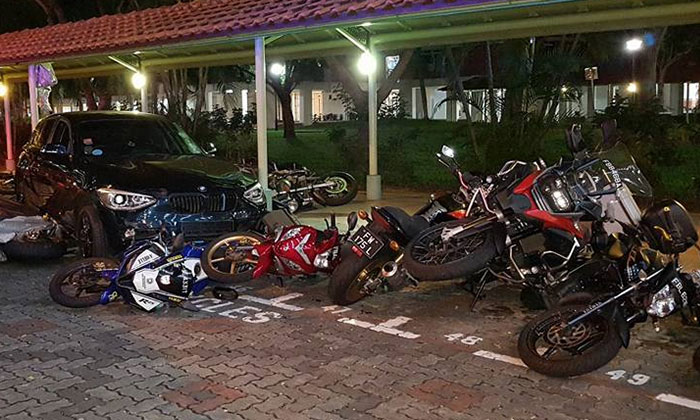 A BMW driver crashed his car into 10 parked motorcycles at an outdoor carpark between Block 100 and Block 103, Lorong 1 Toa Payoh on early Thursday morning (April 5).

He was subsequently arrested for suspected drink drinking.

In a post on April 5, Facebook user Muhammad Saiful Eidur Saimen thanked his neighbours who had stopped the driver from fleeing after the accident.

Said Saimen: "The headache part begins when we can’t claim against his insurance if he is charged with drink driving. Anyone with a good lawyer contact, kindly pm me."

The police said that they were alerted to the incident which happened at the outdoor carpark at about 2.20am.

A police spokesman added that the driver, a 44-year-old man, was arrested for suspected drink driving, and investigations are ongoing.

A 43-year-old resident told Shin Min Daily News that he was watching television in his home when he heard a loud bang from the carpark and rushed down to take a look.

He said: "I went to the carpark to investigate, and was shocked to see a black BMW had toppled 10 motorcycles, which were scattered around it.”

"One of the motorbikes was even wedged under the car and there was debris on the road. The scene was chaotic."

Two other residents also heard the din and came down to the carpark.

Together, the three of them confronted the BMW driver.

Said the resident: "The man suddenly started his engines again. It seemed like he was intending to run, so the three of us intercepted his vehicle and blocked his way.

"Fortunately, due to the motorcycle wedged beneath the car, and its side being blocked by the other motorcycles, the driver couldn’t move his car at all."

A standoff lasting about five minutes ensued before the driver finally alighted his car.

The resident said: "The door to the driver seat could not be opened, and he had to climb out from one of the rear doors."

He added that the driver reeked of alcohol.

According to Shin Min Daily News, the driver had sent a friend home and was making a turn in the carpark when he crashed into the motorcycles.

The resident also estimated it would cost more than $25,000 to repair the damage inflicted on the motorcycles, considering that one of the bikes even

had its gas tank and rear compartment crushed by the car.