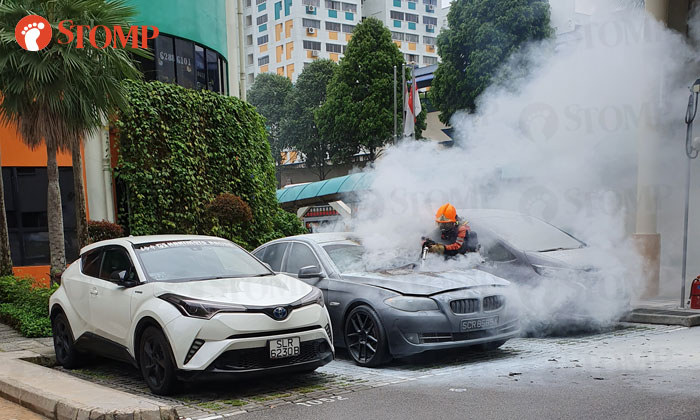 A BMW caught fire at a carpark near Block 129 Pending Road in Bukit Panjang on Friday morning (Nov 15).

A Stomper had parked his car next to the BMW to send his son to the childcare centre at the nearby Bukit Panjang Community Centre (CC) at about 10.40am.

"When I came back I saw the BMW was on fire.

"Passers-by ran to the CC to get fire extinguishers while waiting for Singapore Civil Defence Force (SCDF) officers to arrive."

The Stomper said after SCDF officers arrived to extinguish the fire, he was stuck for an hour waiting for the all-clear to drive off in his car.

Fortunately, there were no external damages to his white Toyota despite being parked right next to the burning vehicle.

In response to a Stomp query, the SCDF said it was alerted to the incident at about 11.11am.

"The fire involving the engine compartment of a vehicle was extinguished by SCDF using two dry powder extinguishers," an SCDF spokesman said.