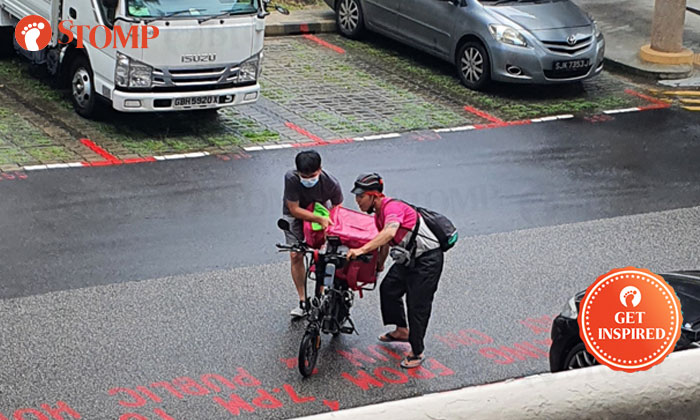 A Stomper was touched by the kindness of a driver who stopped to help a stranded Foodpanda delivery rider near Block 206 Serangoon Central on Nov 18.

Stomper MM said the rider's delivery bag had fallen off his e-bike and he was left looking "confused and helpless".

"The bag appeared heavy and stuck to his bike," he said.

"The bike was stranded in the middle of the road and it was quite dangerous.

"The rider was struggling to lift up the bag and was trying desperately to untie it when a white Honda Vezel tried to pass through.

"The driver decided to park his car instead and came out to help the rider push his bike to the side."

"The rider may have problems explaining to his customers if the food inside the carrier toppled over but I hope they won't complain because everyone has a bad day and today is his.

"It is a difficult time and I hope everyone will be more forgiving and be kind.

"Salute to the kind-hearted driver for being a fine example of how every Singaporean should be."