Driver stops to advise PMD rider to get off the road 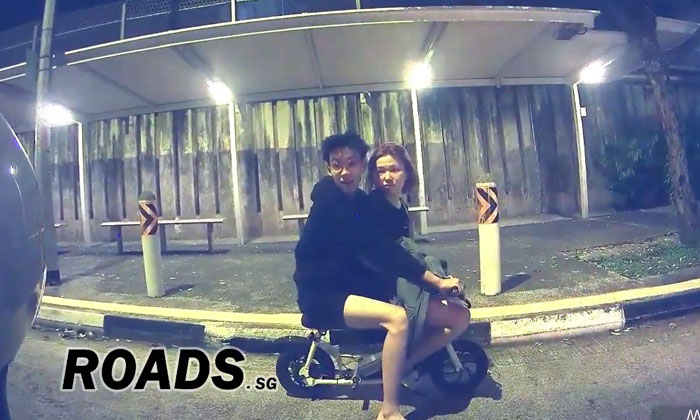 A driver stopped to advise a personal mobility device (PMD) user to stop riding on the road.

The video was posted on YouTube by ROADS.sg. It is unclear where exactly the incident happened but according to the timestamp, it was on Nov 2 at about 1.08am.

In the video, the PMD user is riding along the road with a girl seated in front of him.

The driver calls out to them as they ride past him but they do not stop.

They eventually pull over at a bus stop.

The driver stops and says: "You're not allowed to ride on the road, you know? It's illegal."

The rider's response is muffled.

The driver replies: "Then why are you still doing the illegal thing?"

The driver continues to advise the rider to move onto the footpath for his own safety and that of motorists on the road.

He adds: "You see my car on the pavement or not?"

The rider and the girl then move onto the pavement to continue their journey.

Under the Active Mobility Act, there is a speed limit of 10kmh for e-scooters on footpaths. They are not allowed on roads.

However, e-scooters will be banned from footpaths from Tuesday (Nov 5).

They will be confined to 440km of cycling paths islandwide.

The ban will progressively be extended to other motorised PMDs in the first quarter of next year, including hoverboards and unicycles.

Bicycles and personal mobility aids such as motorised wheelchairs will continue to be allowed on footpaths, cycling paths and park connectors.

Related Stories
PMD riders travel at speeds of up to 70kmh on CTE
PMD rider taken to hospital after accident with car at Toa Payoh
Blink and you'll miss these PMD riders travelling along Jalan Eunos
More About:
e-scooter
PMDs