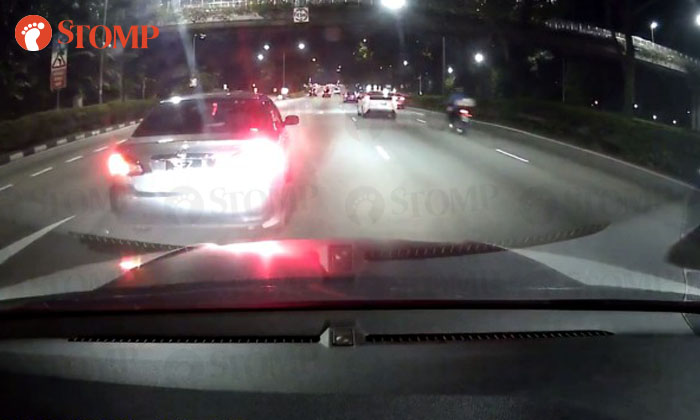 Submitted by Stomper Was

Stomper Was was cruising down the Central Expressway (CTE) towards the Seletar Expressway (SLE) on Dec 19, when a car stopped right in front of him.

The Stomper was on his way home when the incident happened.

He sent Stomp a video captured by his in-car camera.

In the video, the driver stops and waits for other vehicles to pass before making a last-minute decision to exit at Moulmein Road.

The Stomper said: "I was driving and noticed a car slowing down in front of me.

"Suddenly, the car came to a stop.

"The driver wanted to filter left and turn onto Moulmein Road.

"I was shocked but was grateful that there were no cars directly behind me.

"It was quite a close call."

Was wants to advise motorists to watch out for drivers like the one he encountered.

Related Stories
Driver posts video to slam cabby for cutting into his lane, but gets flamed by netizens instead
Driver of GBB206P refuses to keep to own lane on AYE after getting high-beamed for being slow
NUS professor who drove Maserati dangerously gets $5k fine and 13-month ban
More About:
reckless
dangerous
CTE