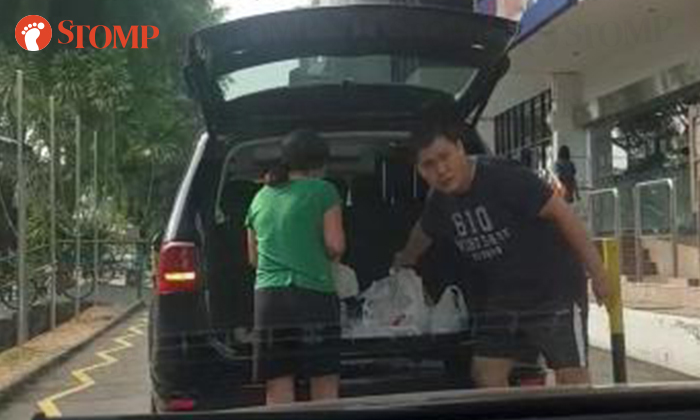 A driver who stopped his vehicle along a single yellow zig-zag line at Coronation Shopping Plaza took pictures of a Stomper after noticing that she was filming him.

According to the Land Transport Authority, there should be no parking or waiting at all times on the road or on the public footpath adjacent to the road when there is a single yellow zig-zag line.

The Stomper contributed videos and a photo of the incident that happened at about 9.20am on Sunday (Aug 25), as she was dropping her child off for tuition at the shopping mall.

The Stomper told Stomp: "The car was waiting with hazard lights on. We waited and saw the driver alighting, but apparently not alighting or boarding passengers.

"Noticed he was approaching a lady pushing a grocery trolley along the walkway. We got his attention before they started loading groceries into the car.

"We highlighted to him politely the single, yellow zigzag line along the driveway and that this should be done in the basement carpark. He blinked, walked away ignored us and started loading."

The Stomper said: "I started to take a video and he noticed this. I stopped filming to avoid any possible confrontation. When he asked, I admitted that I was taking a video as we had already highlighted to him that the driveway is not an unloading/loading zone.

"He started taking pictures of my car. There are instances where elderly are loading/unloading groceries or drivers alighting or boarding less-abled individuals, in which anyone can understand and extend patience.

"In this case, you can see the couple both seem able with no apparent disability or excuse. The couple left the trolley by the walkway and drove off.

"If people come and say: 'Sorry, we'll take time to unload.' It's more about graciousness. People commit small offences but just acknowledge that you're troubling others. Most people would wave, raise their palm or nod as an apology but this guy was complacent. It's like his grandfather's road."

Related Stories
Barrier arm hits car bonnet after driver fails to stop at gantry in Ang Mo Kio
Driver leaves angry note for motorcyclist who parked in car lot at Pickering St: "Grow some brain"
Guy stands in Pepys Road lot to 'chope' it for friend even though another driver is waiting
More About:
fail
Bukit Timah
evade parking fare