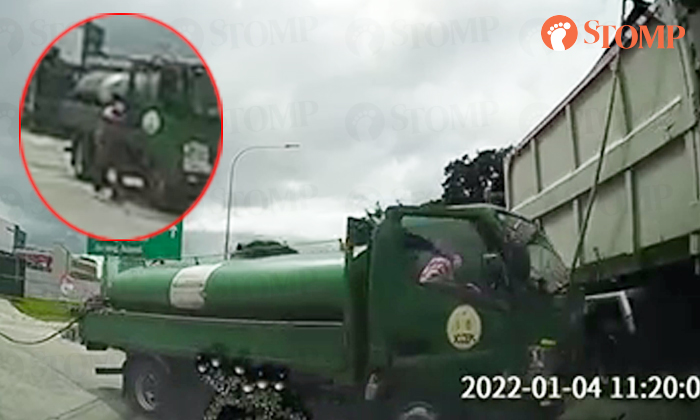 A lorry rolled out into a busy road without its driver, narrowly avoiding a collision with oncoming traffic.

Stomper Ann shared dashcam footage of the incident that she witnessed along International Road last Tuesday (Jan 4), at around 11.20am.

She recounted: "I was driving along a construction site when I saw a lorry rolling out of the site and a guy rushing to hop into the driver's seat at the same time.

"The lorry rolled out into the road and its centre lane, where it nearly collided with a trailer."

A quick-thinking Ann managed to stop in time and avoid an accident with the lorry.

The video shows another two workers running out from the construction site and pulling the lorry back in.

Ann can also be heard confronting the lorry driver for nearly causing an accident as he tried to apologise.

She added: "I spoke to a safety officer and a foreman on site. This incident happened due to negligence as the handbrake was not 100% locked when the driver alighted from the lorry.

"I can't imagine the consequences if I did not manage to brake on time."