Driver rams into woman causing fractured ribs, then tells victim: "I thought I hit a dog" 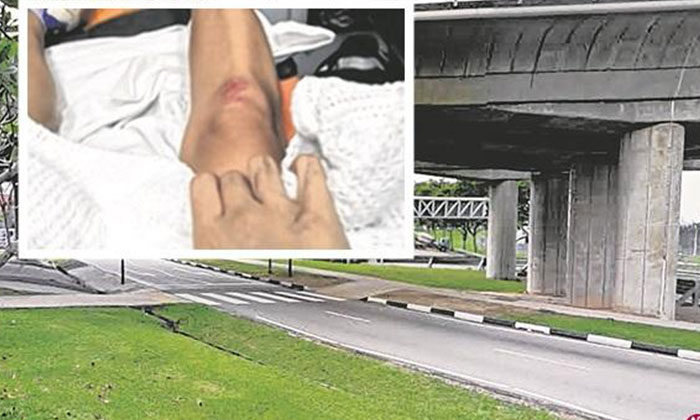 A driver crashed his car into a woman at a zebra crossing, fracturing her ribs, only to then tell her, “I thought I hit a dog".

The accident happened at Ang Mo Kio Avenue 1, towards Bishan, on Thursday (Jan 18) at around 8pm, reports Lianhe Wanbao.

Ms Deng Xiaoyan, 39, is currently looking for the driver to solicit an apology and compensation from him.

She told reporters that she was walking back to her home at Ang Mo Kio Avenue 1 after having her dinner at Junction 8 Shopping Centre when she was knocked down by a grey car.

Ms Deng said that she saw the car approaching from afar and thought that it would slow down.

She was halfway across the crossing when the car rammed into her.

“I was sent flying, then left sprawled on the road.

“Although I didn’t faint, I was stunned for about three to four minutes. I did not know what to do.”

Fortunately, a passing middle-aged woman and a couple in a car stopped to render their assistance.

They helped Ms Deng to sit upright and called for an ambulance.

The couple also retrieved a bottle of disinfectant from their vehicle and applied it on Ms Deng.

After Ms Deng sat up, she saw that the driver who had rammed into her had stopped his car about 10 metres away.

She describes the driver as a bespectacled man who looked to be in his 50s.

The man allegedly told her:

“Girl, you went the wrong way.”

He also told the elderly woman helping Ms Deng that he thought he had hit a dog that suddenly jumped out.

“I was so angry after hearing him say something like that.  I confronted him immediately.

“I told him that even if it had been a dog, it was still a life.”

According to Ms Deng, the passersby also sided her and criticised the driver for his actions.

Ms Deng said that she was dazed and in a moment of panic, forget to take down the driver's licence plate number.

She claimed that although she had asked for the contact details of the driver, he refused to give it to her and has not contacted her since.

“Even after hitting someone, he can still talk like that. I hope to find him and get a formal apology, along with compensation for the medical fees.”

Related Stories
How did this police car end up on road divider along Kampong Bahru Rd?
Truck tips over, causing hydraulic arm to damage car at Geylang carpark
Mercedes driver hits van, causing it to flip over in KPE -- then drives away
More About:
accident
injured