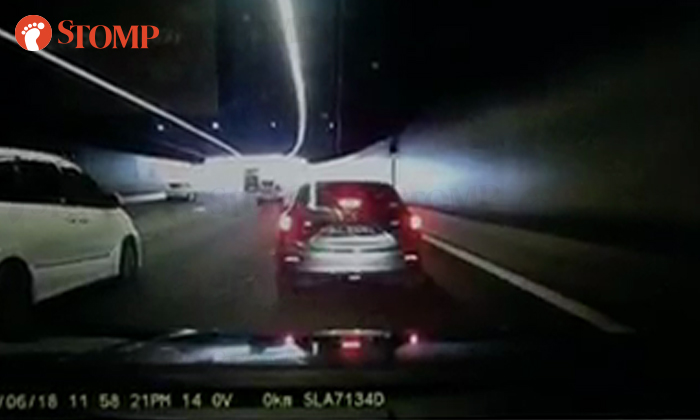 A Stomper was left upset after encountering a driver who played the 'braking game' along the Central Expressway (CTE) on Thursday (Mar 13).

The Stomper said he was travelling along the CTE towards Ang Mo Kio at around 9.21am when the incident occurred.

He recounted: "A car cut into my lane and I slowed down. Then he started a braking game.

"When we went into the tunnel, my car lights automatically turned on. He might have thought that I high-beamed him and got triggered.

"Then, he made a sudden brake that caused me and the van behind us to e-brake.

"I believe the van, with its height, should have seen what happened.

"Moreover, after this e-brake, the car driver pointed his middle finger at me, but it was not captured on video due to the angle.

"Please look at the video and if I'm in the wrong, please correct me. After watching it a few times and showing it to my friends, they told me that I have done nothing wrong too."

Related Stories
Cabby cuts into driver's lane, jams on brakes then stops taxi in the middle of expressway
Audi driver cuts into Stomper's lane without signalling and plays braking game before speeding off
Chevrolet driver jams on brakes, swerves left and right 'like snake' to block Stomper
More About:
braking game
reckless driving