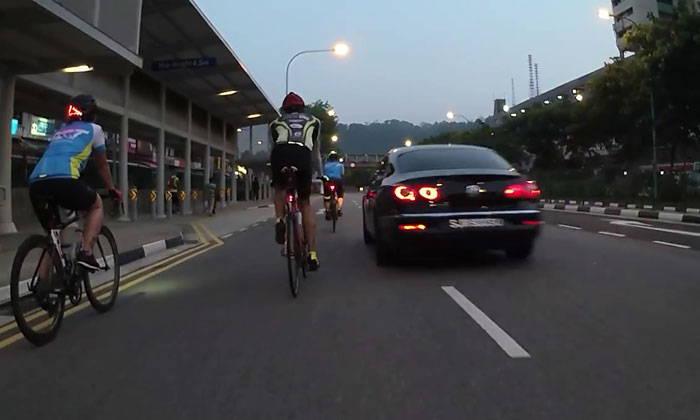 A Volkswagen driver was caught on video driving dangerously close to a group of cyclists who were cycling by the side of a road near Beauty World on Sunday (Apr 21).

Facebook user Alvin Low, one of the cyclists in the group, posted two videos online to show how close he and his teammates were to getting hit by the driver.

He wrote they "could have been killed instantly by this driver of Volkswagen SJR9003U".

He noted that the driver was going at a high speed and "purposely" came within one metre of them.

He said that this happened again when they were near The Rail Mall.

He wrote: "We did not break any traffic rules, did not beat any red lights, nor did we block his way (as you can see he had the whole lane free).

He added that the group of 27 cyclists were riding two abreast in the left-most lane during an off-peak time at about 7am on Sunday.

He wrote: "To the driver of this car Volkwagen SJR9003U, I hope [you] read this and think about the potential pain [you] could cause the families of the cyclists: mothers losing their child, wives losing their husbands and kids losing their parents."

Related Stories
Female cyclist shouts and curses at truck driver after she gets knocked down near Mustafa Centre
Cyclist slams his hand on car bonnet after 'refusing to slow down'
Cyclist falls down after bicycle wheel gets caught in grating -- then acts like it's cabby's fault
More About:
cyclist
cyclists
Volkswagen
dangerous driving