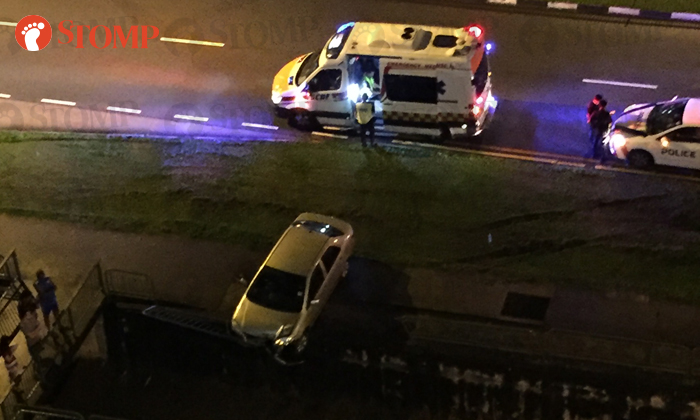 A driver was involved in an accident after his car crashed into a railing along Hougang Avenue 8, towards Upper Serangoon Road, yesterday night (Jan 11).

Stomper Resident was in his unit when he "heard skidding followed by a loud bang."

The Stomper, who contributed a photo showing the car very close to the canal's edge, said: "I went out to the corridor and spotted this car that had crashed into the drain's railing.

"This bend is known to be a hotspot for such accidents, especially during rainy conditions when the roads are wet.

"My neighbour spotted the driver coming out of the car and running away.

"I hope all road users conscientiously practice measures to stay safe and minimise the number of unwanted road accidents."

A close-up photo of the damaged vehicle and the railing, which had been knocked over, was also shared by a Telegram channel.

Responding to queries by Stomp, the police said they were alerted to the accident at 10.59pm.

Related Stories
Man flees and abandons car after crashing into drain near Geylang, was heard cursing
Car crashes through fence at Kallang Basin Industrial Park
A few centimetres more and female driver would have dived into fountain at Oxley Road condo
More About:
accident
trapped in odd spot