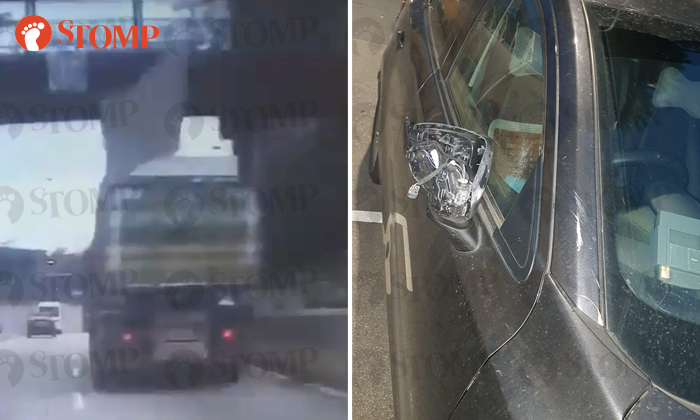 Stomper Y was driving along Clementi Avenue 6 last Wednesday (Aug 7) when his car was truck by a large object that had fallen from a truck in front of him.

According to him, the truck was carrying what he believed to be gypsum plates when one piece appeared to fall off and land right smack on his car.

Y recounted: "This was from the Pan-Island Expressway to the Ayer Rajah Expressway, at the overhead bridge before entering the tunnel.

"I was driving normally when I noticed a truck travelling in front of me. We were approaching a overhead bridge when all of a sudden, a big piece of white board flew off.

"The board, which I think was a gypsum plate, hit my car and then fell on the road.

Y told Stomp that the incident left him "shocked, scared and trembling".

He added: "When I stopped my car afterwards, there were scratches on the front bumper, bonnet and car body. My right-side mirror was totally damaged."

View more photos of Y's damaged car in the gallery.

Related Stories
Flying rock smashes through car windscreen on BKE: 'My pregnant wife and I could have died'
Driver recounts close shave with fallen tree: "It could have been me underneath"
It's 'raining' sofas at Grange Road -- and one nearly lands on motorists
More About:
dangerous
safety
damage
shocking