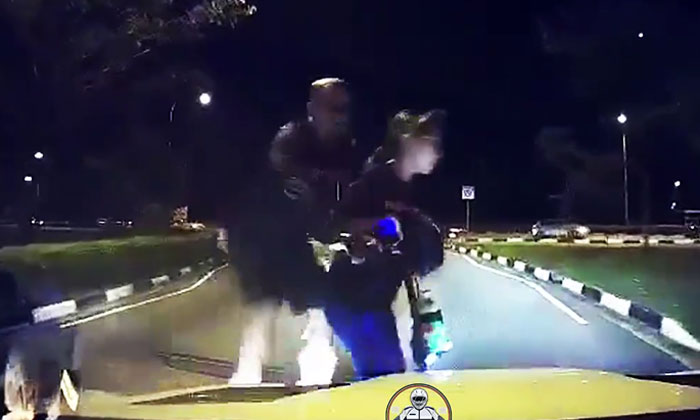 A driver was caught on video driving into an e-scooter user and his pillion rider at a zebra crossing, knocking the couple off the device.

The footage from the driver's dashboard camera was posted in SG Road Vigilante's Facebook group on Monday (Sep 24). It unclear where or when this incident happened but the video's timestamp says March 17, 2017 at about 9.13pm.

In the video, the driver is seen driving across the zebra crossing as the e-scooter rider is coming from the left.

The driver is unable to avoid the scooter and causes both the guy and girl to stumble off the device.

Fortunately, the impact was minor and they appeared to be uninjured.

Following the incident, another e-scooter rider is seen in the video frame gesturing at the driver.

The driver later exits his car and inspects the front of his vehicle for damage.

In the comments, netizens blamed the driver for not looking out for the e-scooter before driving forward across the zebra crossing.

However, one commenter noted that the rider should have stopped and dismounted his device and pushed it across the road.

Related Stories
E-scooter user riding in middle of the road doesn't know the law or simply doesn't care?
3 e-scooter riders without helmets speed and beat red light along Sims Avenue East
You won't look as cool if you get into an accident, guys!
More About:
e-scooters
PMDs
Accidents