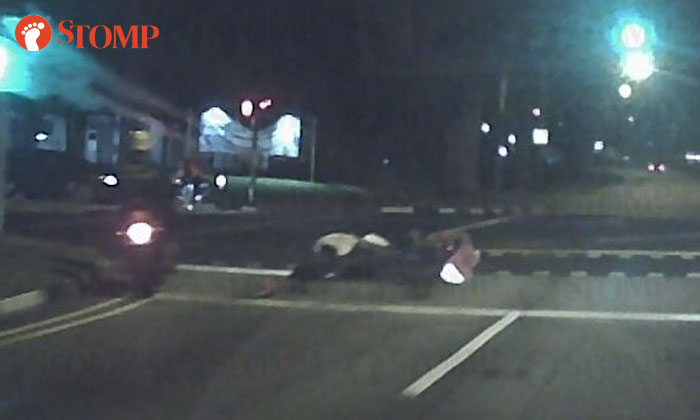 A delivery rider was knocked down by a car at the junction of Bukit Batok East Avenue 6 and Bukit Batok Street 25 on May 31 at about 8pm.

Stomper Darren was driving behind the rider and caught the accident on his car's dashboard camera.

He shared the video with Stomp which shows a car turning left from the right-most lane.

In the video, the driver hits the motorcyclist who is going straight, knocking him to the ground.

Darren told Stomp that he was in a rush to attend to personal matters but returned to the scene about 15 minutes later.

"I spoke to someone there who passed me the rider's number," said the Stomper.

"When I called the rider, he told me that the driver of the car argued that he was not at fault and that he had checked his blind spot while turning."

Darren said that he wants to help the rider gather witnesses of the incident.

In response to a Stomp query, the police said that they were alerted to an accident involving a car and a motorcycle at the junction at 8.40pm.

The motorcyclist, a 28-year-old man, was conscious when conveyed to Ng Teng Fong General Hospital.

If you have any photos or videos of what happened, kindly send them to Stomp at stomp@stomp.com.sg or WhatsApp 9384 3761.

Related Stories
Female driver suddenly jams on brakes at amber light, causing Stomper to crash into car's rear
When the road markings tell you to slow down, you better do so
Man, 85, injured after getting hit by car at Bedok Reservoir Road, family appealing for witnesses
More About:
Accidents
motorcyclists
dangerous driving