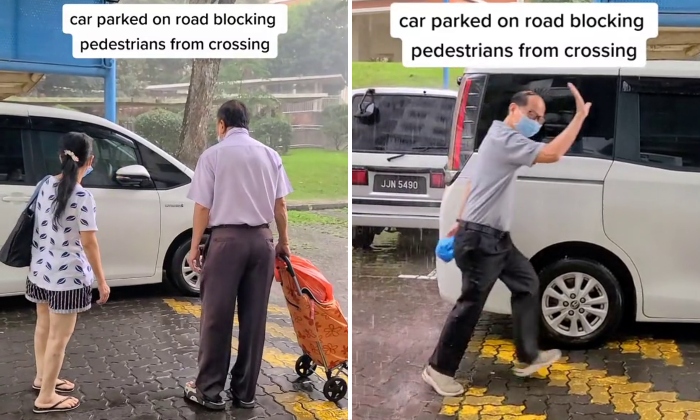 It seems to be raining every day in Singapore this month.

And no one likes to get wet.

So it would be rather inconsiderate for someone to illegally park his Toyota Noah minivan at a sheltered pedestrian crossing on a rainy day, preventing people from getting across the road without getting wet.

That was why a TikTok user named manos1966 took a three-minute video of the incident at Stirling Road in Queenstown and posted it on Wednesday (Aug 24).

It shows a woman hesitating at first before walking around the vehicle in the rain to the other side. But a second woman did not want to get rained on and decided to turn back.

An unseen man's voice can be heard narrating: "There's a car parked here illegally, blocking the pedestrians' way and it's raining heavily."

He commented to the second woman in Mandarin about the lack of civic-mindedness of the driver who did not just stop his car there for a short while, but left his car and ran off.

He later panned the camera around to show other people by the side of the road and said: "See all the pedestrians are waiting to cross because of this car parked right here under the shelter, blocking all of us. Amazing."

Another person in the video said that if only the vehicle had just reversed a little bit, they would have been able to cross.

After a few moments, they saw someone coming. The man taking the video told the woman to scold the driver and he would record it.

A balding, bespectacled man appeared from the other side of the road, trotted through the rain around the minivan and raised his hand apologetically to the waiting people, who scolded him.

The balding man quickly got into the vehicle and drove off. The plate number was recorded in the video.

People were finally able to cross the road without getting wet.

If only they had an umbrella.

Related Stories
Van driver challenges man and poses for photos after blocking cars at AMK carpark
Woman obstructs traffic with 'brainless' parking at Woodlands petrol kiosk
Woman accused of refusing to give way and blocking traffic: 'Why should I let cabby bully me?'
More About:
parking
inconsiderate
Queenstown
TikTok
block