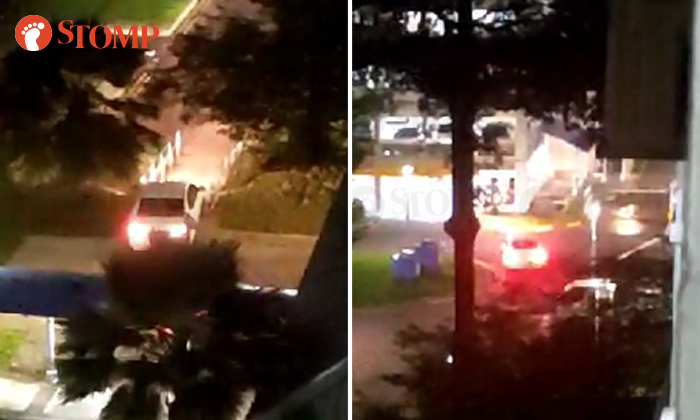 A Woodlands resident was shocked to see a real-life Grand Theft Auto (GTA) scene unfolding right in front of her eyes in the dead of the night.

Stomper ShellShocked shared a video of a driver behaving dangerously in the vicinity of Block 743 Woodlands Circle on September 2, at around 1.53am.

In the video, she be heard expressing shock at the driver's behaviour and exclaiming, "He's gonna kill someone, man!"

The Stomper recounted: "This happened at the carpark area behind Block 743.

"I only managed to get the second part of what happened on video because I could not believe what I was witnessing in the beginning at that odd timing.

"It was only when the driver hit a tree and then made a turn to go back through the same space, that I ran to get my phone to record the incident.

"He/she had forced his/her way through a little lane, screeching the sides of the car against the metal rail guards, and even hit the tree on the right.

"He/she then made a turn somehow and tried to position the car to go through the same way the car came in.

"The way he/she drove, I was just glad there was no one around that area at that time. Many people take their smoke breaks at that area, and there are at least two or three community cats that love to hang around there too.

"Please excuse my shock in saying in the video that he could kill someone. I was hoping that he/she would stop driving and not head out to the roads in that condition."

Related Stories
Watching this video of erratic driver along Bartley Road will make you nervous
Driver can't seem to keep straight, hits tunnel wall and has near-collision with other vehicles
Car literally cuts corners by driving over footpath in Woodlands
More About:
reckless driving
dangerous
woodlands