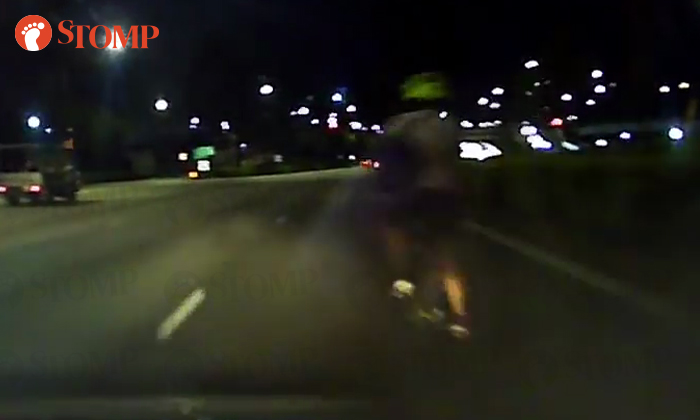 The rightmost lane of an expressway is hardly the most ideal spot for cycling, especially at night when visibility is low.

But that was where exactly Stomper Gabriel encountered a cyclist, whom he had a heart-stopping near-accident with.

Gabriel, who shared dashcam footage of the incident, said it occurred along the Ayer Rajah Expressway (AYE) on Saturday (Oct 17), at around 7.25pm. He noted that the timestamp on the video is incorrect.

Gabriel told Stomp: "In the video from my in-car camera, you will observe that I was driving on the rightmost lane along the AYE. I was driving at a regular expressway speed of under 90km/h and an average of 85km/h.

"Traffic was fairly medium to light and quite clear on the rightmost lane, with heavy vehicles taking up the left and middle lanes. Everything seemed as per usual on a typical Saturday on the AYE towards Jurong.

"No one would have thought that a cyclist would be on the AYE!

"This cyclist appeared out of nowhere riding his bicycle on the rightmost lane along the AYE, almost causing a near-fatal accident to himself and a motorcyclist.

"I’m a regular road cyclist myself but this incident of a cyclist riding on a major expressway is simply not to be condoned.

"His actions not only caused danger to himself and others, it could have ended up being fatal. He could have killed himself and in the event I could not swerve in time to avoid him, it would have caused unnecessary grief to me and my family.

"I can only imagine how fatal it would be for this male cyclist. The distress it would have brought upon my family and myself is unimaginable if this cyclist had gotten killed!!!!!!!!

"No police report has been made at this point.

"This video that I've uploaded on YouTube is my hope for the public, motorists and the cycling community to be aware of how such stupid inconsiderate behaviour is simply undesirable and extremely dangerous."

Related Stories
Driver's near-miss with cyclist in Choa Chu Kang: 'Any faster and I would be in police station'
Cyclist rides past car, flashes middle finger after getting honked at
Cyclists block car and hurl vulgarities at driver at ECP
More About:
cyclist
reckless driving
dangerous
near-miss