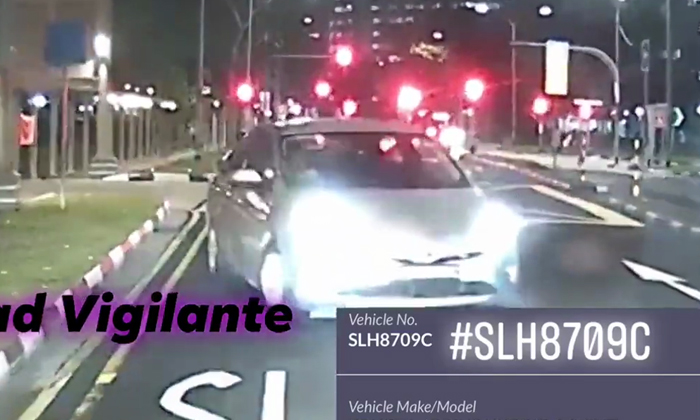 A car driver came head-to-head with another motorist while going against traffic along Hougang Avenue 10.

However, he simply 'righted' himself by casually getting out of the motorist's way and turning into another road.

According to the time-stamp on dashcam footage, the incident occurred on Monday (Dec 6) at around 9.55pm.

Many netizens called for enforcement action to be taken against the errant driver after the video was uploaded online by SG Road Vigilante.

One user said sarcastically: "The driver of the Toyota car demonstrated tremendous courage, confidence and patience as he analysed and explored the traffic condition, road surface and checked meticulously for any shortcut to his final destination."

However, a few eagle-eyed observers noted that the motorist who encountered the Toyota driver was an aggravator too.

A netizen commented: "Cam car speed up just to block him, lmao he also ain't angel, I wonder why Singaporean do this. Let him be and report him lah need to speed up to block meh."

Another added: "Camcar should stop immediately at the sight of the anomaly, instead of rushing forward to block the car."

One user also reprimanded the driver and said: "You already know there is a problem still want to aggravate."