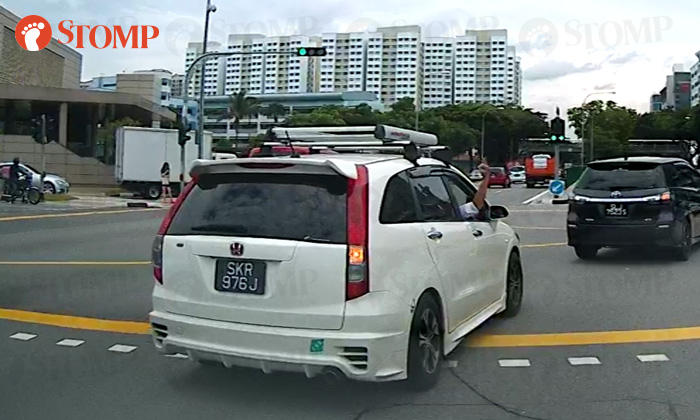 Stomper Fong was driving to work along Paya Lebar Road at 12.37pm on Wednesday (Jul 11) when he chanced upon an ungracious driver who not only cut in front of him but also showed him the middle finger.

In a video shared by Fong, a white car with the plate number "SKR976J" is seen trying to cut into his lane without signalling.

The driver of the white car, whose arm is seen hanging out of the window, appears to gesture for Fong to give way to him.

It was only after the white car managed to cut into the lane then did the driver signalled to turn right.

He then flashed his middle finger at Fong after the latter gave way to him.

Fong, who waited for about five to 10 minutes in the queue, said: "Along with everyone else on the two right-most lanes, I was queueing to make a right turn into Ubi Avenue 2.

"Some people even had to queue for about a kilometre before they can make their turns, yet this driver of SKR976J did not follow the rules.

"He did not even signal when he tried to cut in initially. After I let him in, he even made this kind of hand gesture, as if he owns the road.

"I even tried to be gracious and not honk him for cutting in."