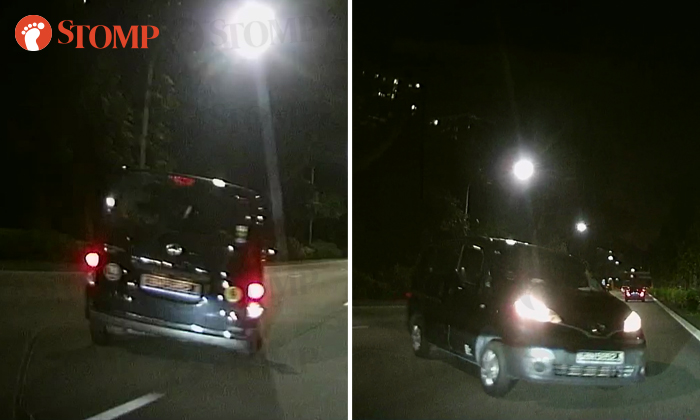 A man was left shaken after nearly getting into an accident with a van that suddenly spun wildly along the Ayer Rajah Expressway (AYE) on Wednesday night (Oct 28).

Stomper Sze Yao shared dashcam footage of the incident that occurred on the AYE towards Clementi, when he was on his way home from work at around 7.53pm.

In the video, the driver appears to lose control of the van, which can be seen swerving left and right violently.

The van then makes a manoeuvre and comes to a stop with its front facing Sze Yao, who manages to stop in time.

Recounting what happened after the close shave, Sze Yao said: "The van driver regained control of his vehicle and started reversing away from me.

"I drove off as soon as I could, as I had stopped suddenly due to the freewheeling van and was worried that there would be cars behind me who would be unable to stop in time and collide with my car.

"As far as I could tell, no other cars were harmed by the van."

Asked what he thought could have caused the van driver's actions, Sze Yao said: "I suspect he fell asleep at the wheel and upon waking up, jerked the steering wheel to the left.

"Thereafter, he probably made a series of over-compensating turns of the wheel that led to the wild fishtailing you see in the video."

As no one was injured and there was no collision, the Stomper did not report the incident to the authorities.

He added: "I posted about it on Instagram Stories by incorporating the following poem:

I am not facing the other way

"I also now listen to 雪落下的声音 ('The Sound of Snow Falling') if I feel like I need extra luck. The song helped me stay calm during quite an unexpected situation."

Related Stories
Are you thinking straight? Because you certainly aren't driving straight on ECP
Mercedes daredevil cuts across 3 lanes after leaving petrol station at Yio Chu Kang Road
Driver has near-accident with cyclist who 'appeared out of nowhere' in the dark on AYE
More About:
near-miss
dangerous
reckless driving
van